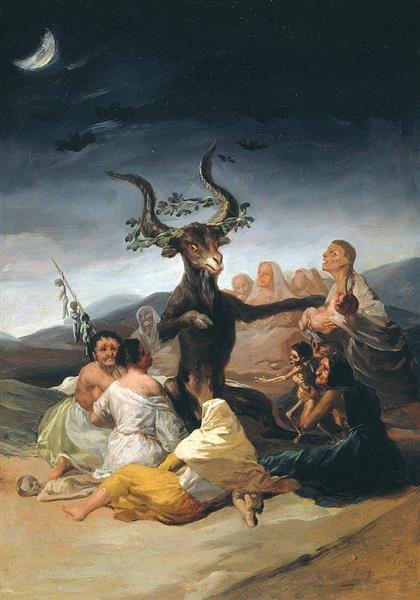 Witches' Sabbath (Spanish: El Aquelarre) is a 1798 oil on canvas by the Spanish artist Francisco Goya. Today it is held in the Museo Lázaro Galdiano, Madrid.

It was purchased in 1798 along with five other paintings related to witchcraft by the Duke and Duchess of Osuna. The acquisition of the witchcraft paintings is attributed to the duchess rather than her husband, but it is not known whether they were commissioned or bought after completion. In the twentieth century the painting was purchased by the financier José Lázaro Galdiano and donated to the Spanish state on his death.

Witches' Sabbath shows the devil in the form of a garlanded goat, surrounded by a coven of disfigured, young and aging witches in a moonlit barren landscape. The goat possesses large horns and is crowned by a wreath of oak leaves. An old witch holds an infant in her hands. The devil seems to be acting as priest at an initiation ceremony for the child, though popular superstition at the time believed the devil often fed on children and human fetuses. The skeletons of two infants can be seen; one discarded to the left, the other held by a crone in the centre foreground.

Typical of the imagery of witchcraft, many of the symbols used are inverted. The goat extends his left rather than right hoof towards the child, while the quarter moon faces out of the canvas at the top left corner. In the middle high-ground, a number of bats can be seen flying overhead, their flocking motion echoing the curve of the crescent moon.

Goya used the imagery of covens of witches in a number of works, most notably in one of his Black Paintings, Witches' Sabbath or The Great He-Goat (1821–1823).

Interest in the supernatural was a feature of Romanticism, and is to be found for example in Weber's opera Der Freischütz. However, in a Spanish context, Goya's paintings have been seen as a protest against those who upheld and enforced the values of the Spanish Inquisition, which had been active in Witch hunting during the seventeenth-century Basque witch trials. The later Witches Sabbath was painted as a bitter struggle raged between liberals and those in favour of a church and a royalist-lead state, which culminated in the so-called Ominous Decade (1823-1833). Both paintings can be seen as an attack on the superstitious beliefs rife in Spain during a period when tales of midnight gatherings of witches and the appearance of the devil were commonplace among the rural populace. They reflect the artist's disdain for the popular tendency towards superstition and the church-led return to medieval fears. Goya's depictions of such scenes mocked what he saw as medieval fears exploited by the established order for political and capital gain.