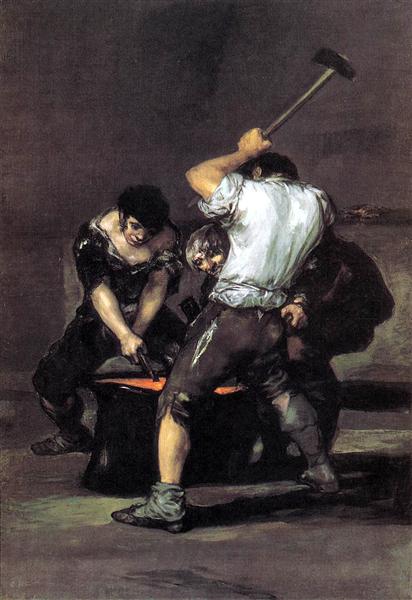 The Forge is a c. 1817 painting by Francisco Goya (1746–1828), today housed in the Frick Collection in New York City. The large oil on canvas represents three blacksmiths toiling over an anvil, and has been described by the art historian Fred Licht as "undoubtedly the most complete statement of Goya's late style."

Devoid of narrative, the painting is an almost photographic capture of a single moment. Set in an ambiguous space, it forms a study in grays, blues and black, punctuated by the blazing red of heated metal. The composition is balanced by the complementary gestures of the figures.

The Forge emphasises the muscularity of the men, who are rendered as classically heroic with thick, strong arms and heavy masculine backs. Yet their faces indicate a coarseness of temperament—a device likely used to make them more identifiable to the common man. The figures are likely intended to represent the working class of the 19th-century Spain—hammering out the future of the country in a literal allegory to the then-popular saying "on the anvil of history". In this way, the work evokes the imagery of resistance to the French threat from Napoleon, earlier examined by Goya in his 1808 painting The Knife Grinder, and may refer to the peoples' participation in drafting the Constitution. Though a court painter, Goya was sensitive throughout his life to the plight of common men. He often captured their everyday lives, usually emphasising the dignity of work or the suffering of war.

Other meanings have been suggested. Art historian Janis Tomlinson notes that the presence of the old man in the painting may be a reference to the Forge of Vulcan, a classical story in which the god was deceived by his young wife; if so, The Forge may also be thematically related to two other paintings by Goya that are the same dimensions: The Young Ones (Les Jeunes) and Time (Les Vielles), each of which illustrate female inconstancy. Though seeing "no hint of a classical source", art historian Michael Fried has interpreted sexual implications in "the strong pelvic thrust of the near worker depicted from behind in combination with the fierce concentration of all the workers on the red hot iron."

The work appears to be related to his drawing Three Men Digging, which may have been made as a preparatory study, and notwithstanding the uncertainty in dating both works, it is supposed that both were done between 1815 and 1820 because of stylistic affinities to the Black Paintings. Despite similarities between the figures' positions in the drawing and the painting, there are several differences. The viewpoint in The Forge is lower, and makes the figures appear more imposing; unlike the drawing, two of the men's faces are visible; and the action in the drawing involves the digging of a hole with farm tools, while that of the painting is focused on an anvil. Both images may be seen as abstracted rather than realistic visions, as they each lack anecdotal context, and place three men in an impractical proximity.