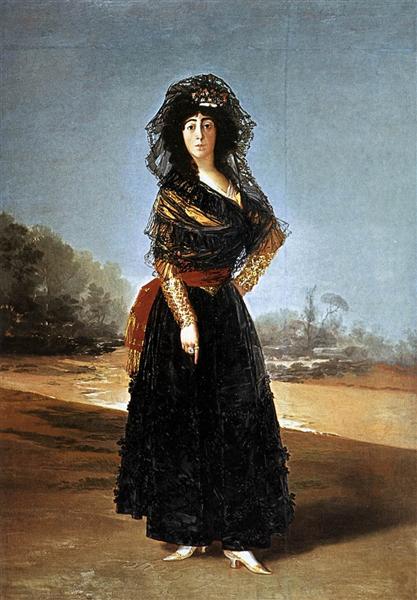 The Duchess of Alba

The Black Duchess (also Mourning Portrait of the Duchess of Alba or simply Portrait of the Duchess of Alba) is a 1797 oil-on-canvas painting by Spanish painter Francisco Goya. In the painting, María Cayetana de Silva, 13th Duchess of Alba (the Duchess) is thirty-five years old. It is a companion piece to the more chaste The White Duchess, completed two years earlier. In this work, de Silva is dressed in low cut Maja clothing, probably she agreed to this depiction as it might show her as a "woman of the people". As of 2012 the painting is kept at the New York Hispanic Society, operated by the Hispanic Society of America.

The Portrait of the Duchess of Alba was painted in 1797 by Spanish painter Francisco José de Goya y Lucientes. The work is kept at the New York Hispanic Society, owned and operated by the Hispanic Society of America. In the painting, the duchess (María Cayetana de Silva, 13th Duchess of Alba) is thirty-five years old, and her husband had died the year before, so she is dressed in mourning clothes (attire). In the painting, she is pointing to the ground, where the words "solo Goya" are lightly engraved. She is wearing two rings, one engraved with the word "Alba", the other engraved with "Goya". The inscription of the word "solo" was initially hidden, but after the painting was restored the word was revealed.

This work is among a number Goya painted of the duchess. When she retreated to a residence after her husband died a year earlier for a period of mourning, Goya followed and created numerous paintings and sketches of the duchess during her stay. One day, the duchess walked into Goya's studio and requested that he put on the duchess' makeup, then create a painting for her, which he did. This painting is the Portrait of the Duchess of Alba, painted at her request.