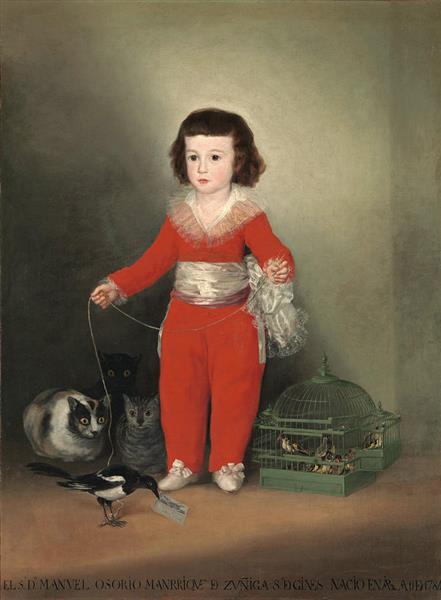 Manuel Osorio Manrique de Zúñiga is a portrait painting by Francisco Goya. It is also known as Goya's Red Boy.

Vicente Joaquin Osorio de Moscoso y Guzmán Fernández de Córdoba (1756–1816), Count of Altamira, had hired Goya for several family portraits. Altamira held many titles and was also a director of the Banco de San Carlos. In 1786, after painting several portraits of the court, Goya was nominated painter to Charles III. This painting, from 1787–88, is of his youngest son, Manuel, who was born in April 1784 and died at age eight on June 12, 1792.

Manuel is dressed in a red costume. He holds a string attached to his pet magpie, who is holding a calling card of the painter. On his left is a cage of finches. Three cats are intently watching the magpie on his right.

The pets in this portrait have been analyzed in many different ways. The caged birds may symbolize the soul, the cats may be an evil force. For example, Goya shows a cat among the creatures in The Sleep of Reason Produces Monsters, part of The Caprices.

In 1926, Kathryn Bache Miller fell in love with this painting while at the Paris art gallery of Joseph Duveen. Her father, Jules Bache, then purchased it for $275,000. The painting was hung prominently in her living room. Her interior decorator, Billy Baldwin, described her attachment to it as if it were a living being. Her father bequeathed the painting to the Metropolitan Museum of Art, but it was allowed to be shown periodically in Miller's apartment until she died in 1979.

From April 22 to August 3, 2014, the museum reunited Manuel with his parents in the exhibit Goya and the Altamira Family. The exhibit also included portraits of his two brothers and his sister.