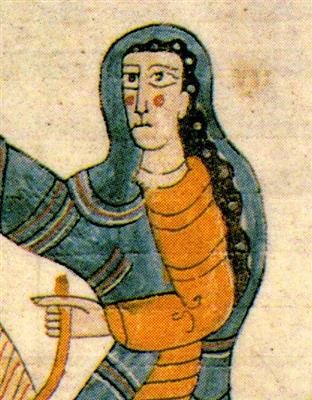 On the Synagogue: the woman seated upon the beast (detail) - Ende

Ende (or En) was a female manuscript illuminator who worked on a 10th-century group of manuscripts, of which there are 24 known copies with illustrations. These manuscripts contain the Commentary on the Apocalypse compiled by the Spanish monk Beatus of Liébana in 786. Her signature appears in the Beatus located now at the Girona cathedral, known as Girona Beatus but maybe she worked in some other codex.

The manuscripts were created in a monastery in the mountains of Leon in northwest Spain. There are a number of hands discernible in the manuscripts. The chief painter was likely a priest called Senior. Historians have also attributed elements of the manuscripts to Emetrius, whose style is attributable in comparison to an earlier signed work. The third attributable hand is that of Ende. She signed the work as DEPINTRIX (painter) and DIE AIUTRIX (helper of god). She was probably a nun.

The illuminations illustrate the Apocalyptic Vision of St. John the Divine in the Book of Revelation in the Mozarabic style. This style developed in Spain after the Muslim invasions, blending elements of Islamic art and decorative traditions, particularly the emphasis on geometry, rich colors, ornamented grounds, and stylized figures.