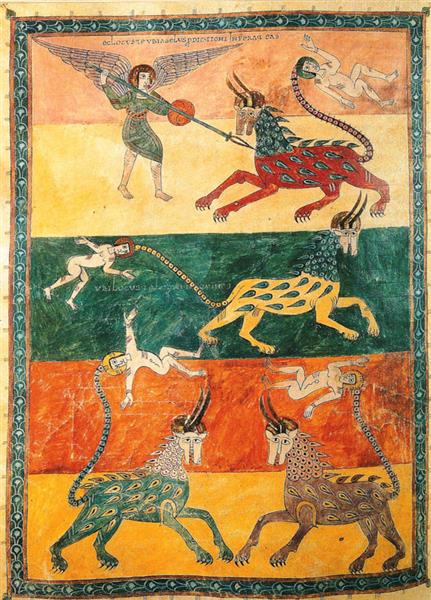 The angel of the abyss and the infernal locusts, 975 - Ende

Pre-Romanesque art and architecture is the period in European art from either the emergence of the Merovingian kingdom in about 500 CE or from the Carolingian Renaissance in the late 8th century, to the beginning of the 11th century Romanesque period. The term is generally used in English only for architecture and monumental sculpture, but here all the arts of the period are briefly described.

The primary theme during this period is the introduction and absorption of classical Mediterranean and Early Christian forms with Germanic one, which fostered innovative new forms. This in turn led to the rise of Romanesque art in the 11th century. In the outline of Medieval art it was preceded by what is commonly called the Migration Period art of the "barbarian" peoples: Hiberno-Saxon in the British Isles and predominantly Merovingian on the Continent.

In most of western Europe, the Roman architectural tradition survived the collapse of the empire. The Merovingians (Franks) continued to build large stone buildings like monastery churches and palaces.

The unification of the Frankish kingdom under Clovis I (465 – 511) and his successors, corresponded with the need for the building of churches, and especially monastery churches, as these were now the power-houses of the Merovingian church. Two hundred monasteries existed south of the Loire when St Columbanus, an Irish missionary, arrived in Europe in 585. and only 100 years later by the end of the 7th century, over 400 flourished in the Merovingian kingdom alone. The building plans often continued the Roman basilica tradition.

Many Merovingian plans have been reconstructed from archaeology. The description in Bishop Gregory of Tours' History of the Franks of the basilica of Saint-Martin, built at Tours by Saint Perpetuus (bishop 460-490) at the beginning of the period and at the time on the edge of Frankish territory, gives cause to regret the disappearance of this building, one of the most beautiful Merovingian churches, which he says had 120 marble columns, towers at the East end, and several mosaics: "Saint-Martin displayed the vertical emphasis, and the combination of block-units forming a complex internal space and the correspondingly rich external silhouette, which were to be the hallmarks of the Romanesque".

Carolingian art is the roughly 120-year period from about 780 to 900 AD, during Charlemagne's and his immediate heirs' rule, popularly known as the Carolingian Renaissance. Although brief, it was very influential; northern European kings promoted classical Mediterranean Roman art forms for the first time, while also creating innovative new forms such as naturalistic figure line drawings that would have lasting influence. Carolingian churches generally are basilican, like the Early Christian churches of Rome, and commonly incorporated westworks, which is arguably the precedent for the western facades of later medieval cathedrals. An original westwork survives today at the Abbey of Corvey, built in 885. After a rather chaotic interval following the Carolingian period, the new Ottonian dynasty revived Imperial art from about 950, building on and further developing Carolingian style in Ottonian art.