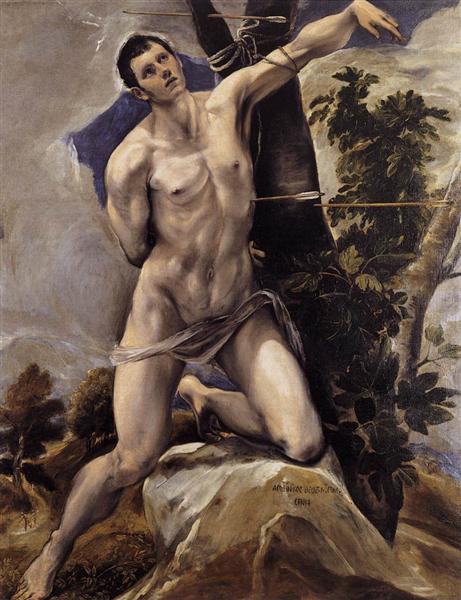 The Martyrdom of Saint Sebastian is an autograph work by the famed artist Doménikos Theotokópoulos, commonly known as El Greco. It shows the Martyred Saint in an atypical kneeling posture which has led some scholars to believe it to be a compositional quotation of various works by other great masters whom the artist admired. The painting is currently on display in the Palencia Cathedral.

The precise details of the provenance of this particular work are, of necessity, based largely on conjecture. Based on stylistic clues and the available documentation, scholars have dated it to El Greco's first decade in Spain, or roughly 1576-79. Many scholars have suggested that as El Greco's first major commission in Spain, the decoration of three altarpieces in the convent Santo Domingo el Antiguo (Monastery of Saint Dominic of Silos (the Old))—as indicated by a contract signed a month after that for The Disrobing of Christ which would hang in the vestry of the Cathedral at Toledo—was obtained for him by Diego de Castilla, dean of the cathedral and father of El Greco's friend Luis it might be logically assumed that the Martyrdom of Saint Sebastian was painted for the same patron. Indeed, the assumption, based on stylistic similarity and the historical timeline of the Cretan painter's career, seems to have obtained such currency that Johnathan Brown, for example, in his discussion of the Palencia Sebastian, simply notes that it was “possibly painted for Diego de Castilla” without further discussion. And yet, this assignment of patronage is not universally accepted. Providing an alternative theory of how the painting came to Palencia, Jesus San Martin Payo, based on his study of a sixteenth century manuscript by Dr. Ascencio Garcia on the history of the diocese of Palencia, suggests that the painting was originally owned by Don Juan Alonso de Cordoba the “right arm of the bishop don Juan Ramirez Zapata de Cardenas, patron of the chapel of San Jeronimo, and in whose sacristy” (brazo derecho del obispo don Juan Ramirez Zapata de Cardenas, patrono de la capilla de San Jeronimo, y en cuya sacristia) the painting by El Greco can currently be found. As Juan Ramirez Zapata de Cardenas served as Bishop of the diocese from 1570 until his death in 1577, this alternative theory would indicate that the Martyrdom of Saint Sebastian would actually predate El Espolio, or The Disrobing of Christ, which is generally considered the artist's first known Spanish work.

The painting depicts Saint Sebastian, as a victim of Diocletian's suppression of Christianity during the 4th century AD. According to popular legend, Sebastian was bound to a tree and shot with arrows, but was miraculously rescued and healed, only to achieve martyrdom when he was clubbed to death shortly thereafter. Saint Sebastian is a popular saint in both the Roman Catholic and Greek Orthodox traditions. Pierced with arrows—a symbol associated with divine punishment in the form of pestilence since antiquity—and yet miraculously saved from near death, Saint Sebastian was often invoked to intercede on the behalf of plague victims in the 15th and 16th centuries when the painting would have first been put on display. Perhaps because of the popularity of Saint Sebastian during the second plague pandemic, or because his martyrdom offered Counter-Reformation era artists one of the few opportunities to portray the nude in religious art, there are numerous examples of the Saint painted by El Greco and his contemporaries and an established iconographical schema for his portrayal.