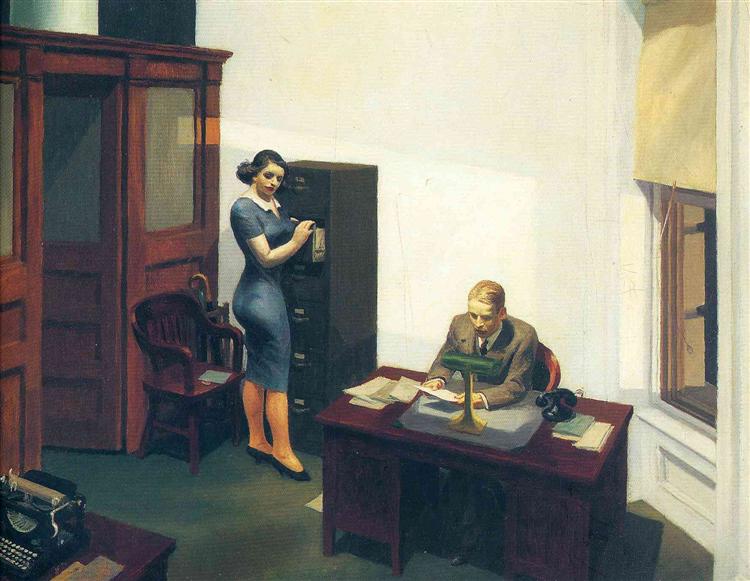 Edward Hopper Fair Use
last edit: 2 May, 2019 by SpenceEmmett

In 'Office at Night', the light comes from three sources: an overhead light, the lamp on the man's desk, which sheds a small puddle of intense light, and from a street-light shining in the open window on the right-hand side. Hopper reported that the overlap of the light from the ceiling fixture and the light from the exterior created particular technical difficulties, since they required him to use different shades of white to convey the idea of degrees of shadow. A careful examination of the corner behind the woman reveals the faint shadow that she casts in the weak light of the ceiling fixture, almost lost by the sharply-etched shadow of the filing cabinet in the brighter light of the street lamp.

Office at Night is a 1940 oil-on-canvas painting by the American realist painter Edward Hopper. It is owned by the Walker Art Center in Minneapolis, Minnesota, which purchased it in 1948.


The painting depicts an office occupied by an attractive young woman in a short-sleeved blue dress who is standing at an open file cabinet, and a slightly older man who is perhaps in early middle age. He is dressed in a three-piece suit and is seated behind a desk. The nature of the office is unclear—it could just as easily be the office of a lawyer, an accountant or of a small business.


Several clues provide context. The high angle from which the viewer looks down on the office implies that the viewer may be looking in from a passing elevated train. Indeed, Hopper later informed Norman A. Geske, the curator of the Walker Art Center which acquired the painting in 1948, that the idea for the painting was "probably first suggested by many rides on the 'L' train in New York City after dark glimpses of office interiors that were so fleeting as to leave fresh and vivid impressions on my mind." So this is not a prestige office—a fact that is reinforced by the awkward lozenge shape of the room and by the small size of the man’s desk. A yet smaller desk, holding a typewriter, may belong to the woman. This implies that she may be his secretary.


Still, this is a corner office which indicates that within their small organization this is the most prestigious available space and therefore that the man is, perhaps, the manager or boss.


As in many of his other paintings, Hopper shows movement by means of a wind-blown curtain. In this painting, the ring at the bottom of the drawstring on the blind is swinging outward after the blind has been blown in by a gust of wind—possibly in response to a cross-breeze caused by the passing train.


The gust explains two other things. First, there is a sheet of paper on the floor beside the desk which must have just blown there from the desk as it has caught the woman’s eye. Second, the wind has blown the dress tightly around her legs, revealing her voluptuous figure to the strangers on the train—but not to the man who stares intently at another document.


There is a sexual interpretation of the relationship between the two individuals. Here, as in a number of Hopper’s works, such as Evening Wind (1921) and Summertime (1943), the stirring of curtains or blinds seems to symbolize emotional or physical stirrings. By contrast, listless curtains in other Hopper paintings like Eleven A.M. (1926) and Hotel by a Railroad (1952) seem to imply emotional stagnation or an inability to connect.


One critic writes, "Although the room is brightly lit, we sense that something strange is going on. Apart from the relationship between the two figures, the suspenseful mood arises from the circumstance that they are apparently poring over confidential material at this late hour, looking for a certain document that has yet to turn up." The man's intense concentration suggests that the matter is critical to him—he has not bothered to take off his jacket despite the fact that it is warm enough for all the windows to be open, and he seems not to have noticed the wind which has caused a document to fall to the floor.