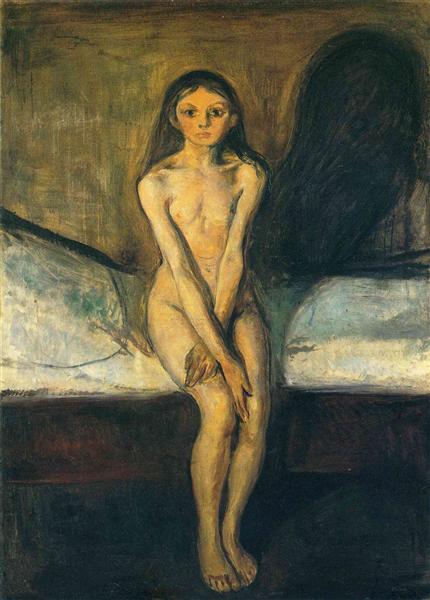 Created in the 1890’s when Munch was beginning to establish himself in the art world, Puberty is a representation of Munch’s sexual repression. The painting is ripe with tension. It depicts a young pubertal girl, nude, sitting with her legs together in a shy pose. It is at once a respectful representation of the girl’s awareness of her changing body, as well as an indication of repressed sexual desire. There are also theories that Munch has represented himself in the figure of the girl and that he illustrated his own undeveloped sexual desires in the form of the girl. As such, it has generated much controversy, including many conjectures about the model, the meaning of the painting, and its genesis.

Puberty (Norwegian: Pubertet) is a painting created by Edvard Munch. Munch is an artist native to Norway and is widely known for his role in expressionistic art. Puberty has also been done as a lithograph and an etching by Munch.

In the late 1880s and into the mid-1890s, Munch, in his mid-twenties, had begun to create his series of Puberty pieces. At this time Munch had already established himself as a notable artist in Berlin. During this period of his life Munch often found residence in Berlin, where his newfound fame and circle of friends were. His new group of friends are attributed for helping push Munch further into his sexually depressed state of mind. Munch allowed this sexual depression to seep into Puberty and like other works he created later this piece was created with symbolism reflecting feelings which continued growing increasingly within the next ten years. This state of sexual depression is one that not only his circle of friends shared with him, but that the psychological scholars had also been curious about having just written the first research on the stages and occurrences of puberty in young adults.

Munch's painting Puberty depicts a young naked girl sitting on the edge of a bed. Her legs are pressed together. She holds her hands in front of her body; one lies between her knees, while the other rests on her right thigh. She stares straight ahead with eyes wide open. Her mouth is closed and her long hair hangs down over the shoulders. The light enters from the left, and behind her a dark, ominous shadow is visible. The motif is often regarded as a symbol of anxiety and fear, a young girl's awakening sexuality and the changes a young person experiences physically and psychologically on the path towards adulthood.

Puberty was a spark towards the progress of his personal emotional journey in how he portrayed his feelings in his artwork.