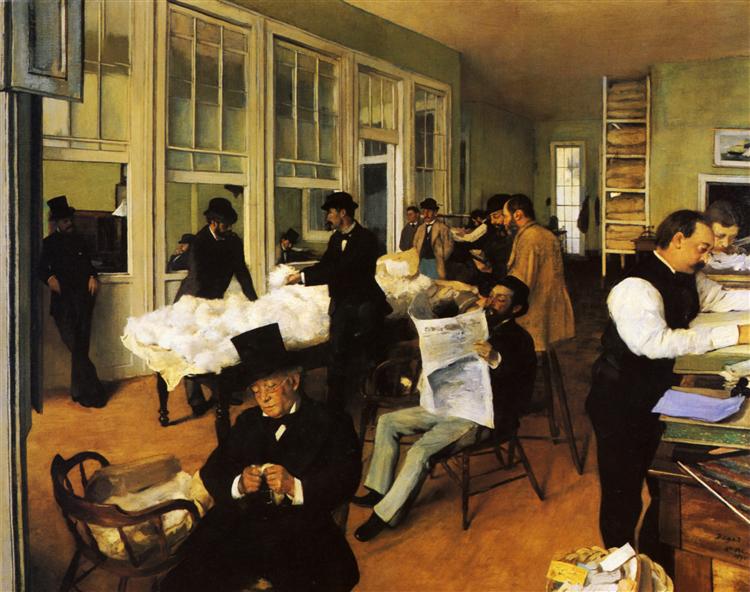 A Cotton Office in New Orleans

In 1872, Degas traveled with his brother Rene to New Orleans, Louisiana, to visit their uncle, Michel Musson. After his departure in 1873 back to France was delayed, he decided to paint to pass the time, and intended this painting to be sold to a British textile merchant. But, a worldwide decline in cotton prices made it impossible to make the sale, and he instead exhibited the work in the Impressionist Exhibition in Paris in 1876. In 1878 it was purchased by the Museum of Fine Arts, making it the first sale of one of Degas’ works to a museum.

A Cotton Office in New Orleans is an 1873 oil painting by Edgar Degas. In it, Degas depicts his uncle Michel Musson's cotton brokerage business (which several years later went bankrupt in an economic crash, according to Michael McMahon of the Pittsburgh Post-Gazette when the firm was swamped by the postwar growth of the much larger Cotton Exchange). In the painting, Musson is seen examining raw cotton for its quality while Degas' brother Rene reads The Daily Picayune. Another brother, Achille, rests against a window wall at left while others, including Musson's partners, go about their business.

A Cotton Office in New Orleans was the first painting by Degas to be purchased by a museum, and the first by an Impressionist. Degas' sale of the piece marked a turning point in his career as he moved from being a struggling, unrecognized artist to a recognized and financially stable artist, according to Marilyn Brown in her book Degas and the Business of Art: A Cotton Office in New Orleans.

Degas traveled from Europe to New Orleans in late 1872 with his brother, René, to visit his mother's brother, Michael Musson. After the American Civil War, René had joined his uncle's cotton business in New Orleans. Degas was to return to Europe in January 1873, but when his return trip was delayed, he was asked by his relatives to paint their portraits, and decided to show them as a group, at work in the family office.

Degas crafted his work with the intent of selling it to a British textile manufacturer. But a drop in stock prices worldwide and declines in the cotton and art markets ended his hopes for that specific sale. Degas then exhibited A Cotton Office in New Orleans in the second Impressionist show in Paris in 1876. Degas finally sold the painting in 1878 to the newly founded Musee des Beaux-Arts in Pau, France.