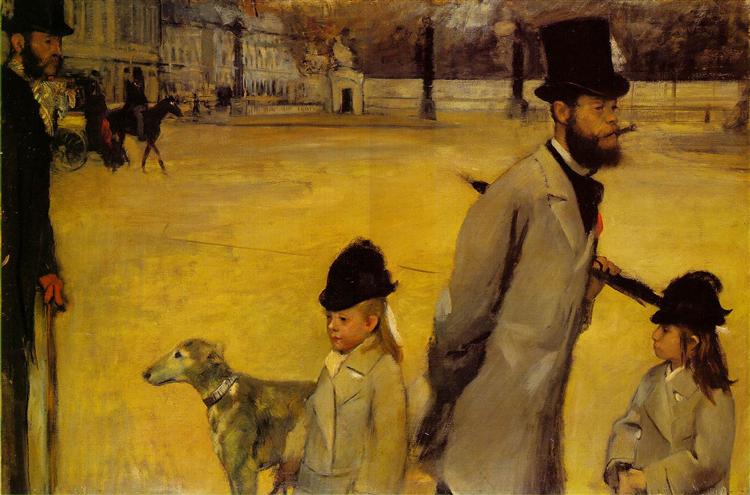 This painting depicts the Viscount Ludovic-Napoleon Lepic and his two daughters, strolling through the Place de la Concorde in Paris, France. For four decades after World War II, this painting was considered lost. It was found when it was put on display at the Hermitage Museum in Russia, where it still remains. It was later discovered that the Russians had seized the painting from the collections of Otto Gerstenberg during the Soviet occupation of Germany following World War II. The composition, with a large amount of negative space, is thought by art historians to be based off of a photograph, which was an interest of Degas’ in his later life.

Many art historians believe that the large amount of negative space, the cropping, and the way in which the figures are facing in random directions were influenced by photography.

The painting was considered lost for four decades following World War II, until Russian authorities put it on exhibition at the Hermitage Museum in Russia, where it remains to this day. During the Soviet occupation of Germany, the work was stolen by the Soviets from the collection of Otto Gerstenberg and eventually moved to the Hermitage.

Degas also painted Ludovic Lepic and His Daughters in a separate painting.