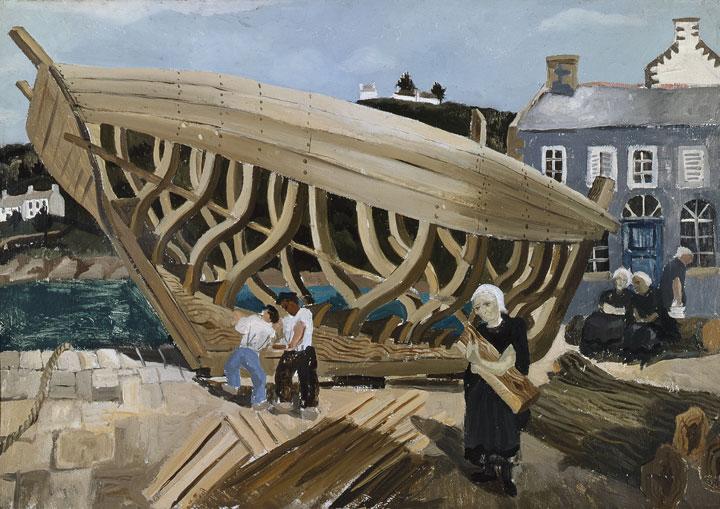 Building the Boat, Tréboul is characteristic of Christopher Wood's style and methods in the last months of his life. Inspired by the example of Vincent Van Gogh, he explored rural and natural themes in search of a retreat from his troubles. The painted surface is thickly worked using energetically applied primer, the strokes of which are visible and unrelated to the final image. As was his practice, the main image was established first and the background painted around it. This means that the priming is still visible in the green of the sea to the left and in the houses on the hill. Last and thickest of all was the eggshell blue of the sky.
The composition is carefully conceived and derived from the actual presence of a boat being built beside the port, confirmed by a closely related canvas, The New Boat, Tréboul, which shows the boat in the same state of construction. Unexpectedly, an old woman holds a plank. This use of the unconventional seems to indicate that the painter found some particular significance in the gesture. He dressed the woman in black and made her the focus of the foreground and of the gossip of her companions behind. The impression of mourning is forceful and the way she hugs the wood suggests consolation. The implications of concerns with mortality are consistent both with the subject and with the period in which the canvas was painted.
Beside Wood's few companions in Brittany that summer, one of the first people to see his output was the dealer Lucy Wertheim. She was preparing a show of his work to open her London gallery and travelled to Paris especially to see his latest paintings. She recalled: "My first feeling as Kit placed a large new canvas on the easel in front of me was one of dismay. I had got so used to the sombre depth and colouring of the paintings I now owned by him ... that this new mood in which he was painting came to me as something of a shock." The contrast with the more hallucinogenic works which she owned was indeed marked.
Unlike her, Jim Ede favoured the fresh and the apparently innocent side of Wood's work, though he was of course aware of their darker side. In A Way of Life he wrote of Building the Boat, Tréboul: "skeletons of ships in process of being built, which foreshadow the skeletons of the fishermen who would take them out to sea and not return. Wives and mothers, who had sent their husbands and their sons, help a younger generation to build new ships of death. I see this in his thought since he wrote of it in a letter. How pictorially he has visualized it; without a shade of sentimentality." Ede owned the painting by 1932, having presumably acquired it in the division of the artist's estate in late 1930. He had made some attempt to interest the Tate Trustees in Wood's work, but remarked that the painter was considered "consciously naïve and not inevitably so" within the institution.