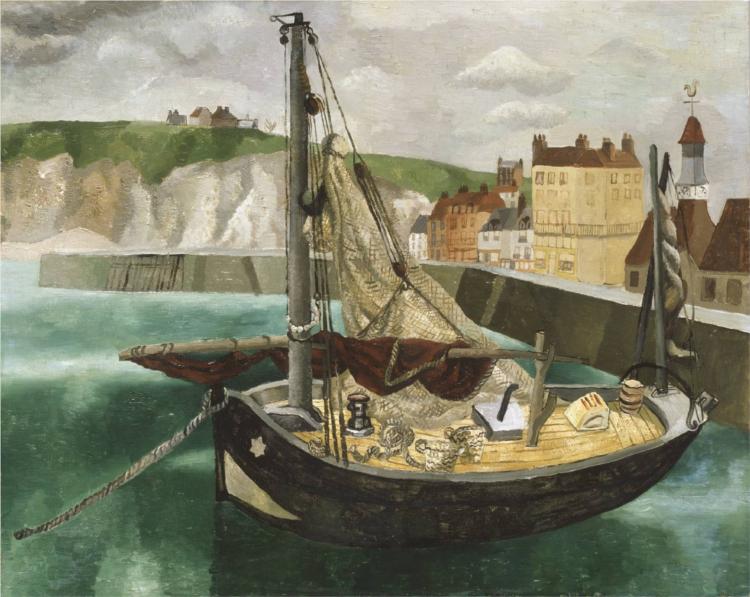 A Fishing Boat in Dieppe Harbour

In 1929 Wood wrote to his mother that he had found 'a very good painting place'. He was writing from Dieppe where he had arrived a few days earlier with his friend Frosca Munster. The Normandy port, renowned for its scallops and herrings brought in by the fishing fleet, had attracted many artists, notably Walter Sickert (1862-1942) who had painted the buildings of the town, and Georges Braque (1882-1963). Braque had visited Dieppe in 1928, and built a house and a small studio in nearby Varengeville the following year. He painted the foreshore and studies of small boats, which Wood may have seen. Furthermore Dieppe would have reminded Wood of St Ives, where he had stayed with his friends Ben (1894-1982) and Winifred Nicholson (1893-1981) a few months earlier. There he had become fascinated with boats and the traditional life of fishing communities, a subject that was to become a recurring theme in his paintings during his last years.
A Fishing Boat in Dieppe Harbour is characteristic of many of Wood's paintings from the late 1920s. Many art historians, including Charles Harrison, have made comparisons between these paintings and the work of Alfred Wallis (1855-1942). Wood had met Wallis, a reclusive seventy year old Cornish fisherman, whilst staying in St Ives in 1928. Harrison suggests that, following frequent visits to Wallis's studio to see his naïve paintings of sailing boats on irregular shaped pieces of cardboard and wood, Wood's paintings became 'more robust in shape and colour' (Harrison, p.189). Wood's interest in the design of Wallis's little pictures is evident from the manner in which he allows the boat to dominate the composition. In addition, as Ingleby remarked, the boat 'is poised at an angle to the sea, like an object on a table top' (Ingleby, p.213). This enabled Wood, who himself was an experienced sailor, to include details of the equipment and rigging. Behind the harbour wall he paints the tall cliffs, the homes of the fishermen in Le Pollet and a weather vane, which appears to be out of scale to the rest of the scene. In contrast to many of the pictures Wood made at Dieppe, in which he used a neutral palette of black, white, greys and creams, A Fishing Boat in Dieppe Harbour is richly coloured. The turquoise sea and threatening grey sky contrasts with the brightly coloured houses and yellow wooden boards in the boat.
A preparatory drawing for this painting in the collection of Aberdeen Art Gallery and Museums reveals that, despite its childlike appearance, Wood thought carefully about the composition of the finished work. Sophie Barthelemy suggests that he 'integrated it [the boat] fully into a complex interplay of lines, and colours values, creating a composition that is at once densely structured and rigorously simplified' .