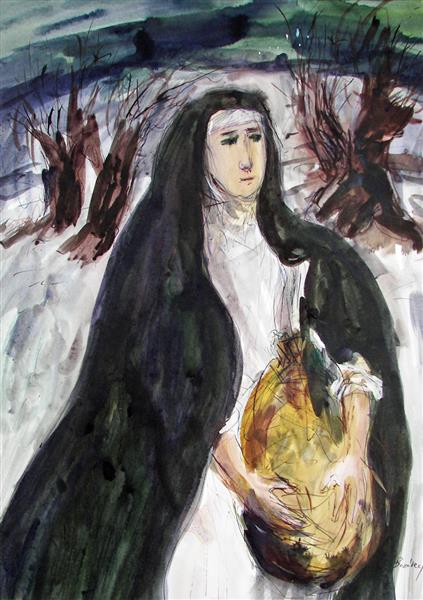 Saint Margaret at the Rabbits Island

Saint Margaret, O.P., (January 27, 1242 – January 18, 1270) was a Dominican nun and the daughter of King Béla IV of Hungary and Maria Laskarina. She was the younger sister of St. Kinga of Poland (Kunegunda) and the Blessed Yolanda of Poland and, through her father, the niece of the famed Saint Elizabeth of Hungary.

Margaret was born in Klis Fortress in the Kingdom of Croatia, the eighth and last daughter (9th of 10 children) of the royal couple. They resided there during the Mongol invasion of Hungary (1241–42) as her father was also ruler of this land. Her parents vowed that if Hungary was liberated from the Mongols, they would dedicate the child to religion.

The three-year-old Margaret was entrusted by her parents to the Dominican monastery at Veszprém in 1245. Six years later she was transferred to the Monastery of the Blessed Virgin founded by her parents on Nyulak Szigete (Rabbit Island) near Buda (today Margaret Island, named after her, and a part of Budapest; the ruins of the monastery can still be seen). She spent the rest of her life there, dedicating herself to religion and opposing all attempts of her father to arrange a political marriage for her with King Ottokar II of Bohemia.(Wikipedia)