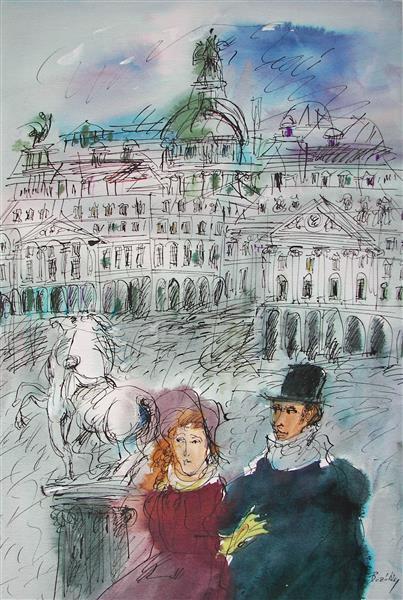 Mr. and Mrs. Batsanyi in Paris

János Batsányi (1763-1845)
In 1785, he published his first work, a patriotic poem, "The Valour of the Magyars". In the same year he obtained a job as clerk in the treasury of the Hungarian city of Kassa (Košice), and there, in conjunction with other two Hungarian patriots, edited the Magyar Museum, which was suppressed by the government in 1792.
In the following year he was deprived of his clerkship and in 1794, having taken part in the conspiracy of Ignác Martinovics, he was thrown into the state prison of the Kufstein Fortress, where he remained for two years.
After his release, he took a considerable share in the Magyar Minerva, a literary review, and then proceeded to Vienna, where he obtained a post in the bank. He married Gabriella Baumberg, a renowned poet from Vienna in 1805. Four years later he translated Napoleon's proclamation to the Hungarians, and, in consequence of this anti-Habsburg act, had to take refuge in Paris.
After the fall of Napoleon he was given up to the Austrians, who allowed him to reside at Linz until his death.

Gabriella Baumberg (1766-1839) wife of János Batsányi (also Bacsányi), was an Austrian author and poet.
Von Baumberg was born in Vienna, the daughter of an Austrian civil servant. She received a humanistic education and from early on was fascinated by literature. As a result of her interest she later frequented the literary circles of Vienna.
She married the Hungarian author János Batsányi in 1805. Her husband translated Napoleon's proclamation into Hungarian after which, as a traitor, he was obliged to flee to Paris, taking his wife with him.
After the end of the Napoleonic Wars Batsányi was handed over to the Austrian authorities, who at first imprisoned him in Vienna and then exiled him to Linz. Gabriele accompanied him to both places, and died in Linz in 1839.
She wrote short poems and prose pieces throughout her life.