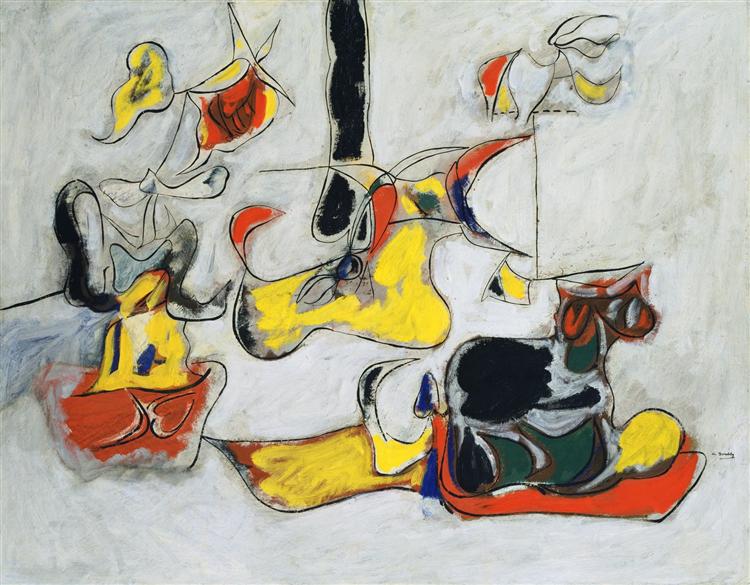 The Garden in Sochi

The Garden in Sochi (ca. 1943) belongs to a group of paintings by Arshile Gorky, which relates to the theme of his childhood memories in his native country Armenia. Here, and in an earlier version The Garden in Sochi (1941), the artist was inspired by memories of his father’s garden and farm. Although the title implies that the location is Sochi, a Russian resort town on the north shore of the Black Sea, Gorky’s father farm was actually on the shore of Lake Van. Another possibility is that the title alludes to the Armenian word for poplar tree, sos or sosi. The poplar tree is beloved in Armenia, and for Gorky, it also held special significance. His family had a custom of planting a poplar tree every time a son was born, and later the child’s name and birthdate would be carved into the tree. In a letter to his sister, he also mentioned that he thought it would be better to name the paintings after a popular place that Americans were more likely to know.

The artist elaborated on the images he associated with his father’s garden. He remembered an uncultivated orchard with old apple trees that created dense shade, fields with wild carrots and porcupines, and a large dead tree and blue rock that local villagers believed had supernatural powers. People passing by the ‘Holy Tree’ would tear small pieces of clothing and hang them on the tree as good omens. Similarly, women would come to the blue rock and rub their breasts against it, believing this would help with their fertility. In The Garden in Sochi, Gorky reimagined the natural scenery and rural rituals through a colorful composition of biomorphic shapes. Some shapes resemble Gorky’s description of the garden, for example, the forms in the upper right corner look like a tree with thin branches blowing in the wind, and the shapes in the lower left corner possibly represent a female figure. Stylistically, the artist was influenced by the works of Spanish surrealist Joan Miró. The Garden in Sochi shares a resemblance with Miró’s signature biomorphic forms seen in paintings such as Nude (1926) and Painting (1933). However, this was not the artist’s only inspiration: many Armenian manuscripts in Gorky’s native province of Van have sharply pointed forms of slippers and draperies, and abstract motifs of birds and animals.

The “Sochi” group of the painting represents an essential phase in Gorky’s artistic development. These paintings continue Gorky’s emulation and synthesis of Pablo Picasso’s cubist style and Miró’s biomorphic forms that were already seen in his late 1930s paintings like Child of Idumean Night (Composition No.4) (ca.1936) and Khorkom (ca.1936). In comparison to the 1941 version, the composition of the 1943 The Garden of Sochi is more open, and the white background gives the painting a sense of airiness. Most significantly, in The Garden of Sochi Gorky separated the function of the line and color. It was a critical development for Gorky’s mature style as is evident in the later painting The Liver is the Cock’s Crumb (1944).