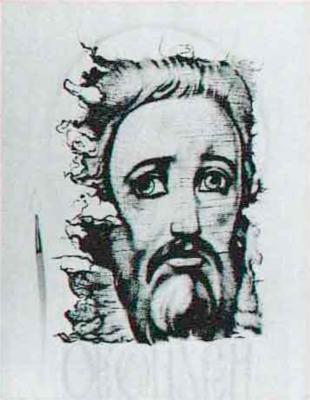 Andrei Rublev (Russian: Андре́й Рублёв, IPA: [ɐnˈdrʲej rʊˈblʲɵf], also transliterated as Andrey Rublyov; born in the 1360s, died 29 January 1427 or 1430, or 17 October 1428 in Moscow) is considered to be one of the greatest medieval Russian painters of Orthodox icons and frescos.

Little information survives about his life; even where he was born is unknown. He probably lived in the Trinity-St. Sergius Lavra, near Moscow, under Nikon of Radonezh, who became hegumen after the death of Sergii Radonezhsky in 1392. The first mention of Rublev is in 1405, when he decorated icons and frescos for the Cathedral of the Annunciation of the Moscow Kremlin, in company with Theophanes the Greek and Prokhor of Gorodets. His name was the last of the list of masters, as the junior both by rank and by age. Theophanes was an important Byzantine master, who moved to Russia and is considered to have trained Rublev.

Chronicles tell us that together with Daniil Cherni he painted the Assumption Cathedral in Vladimir in 1408 as well as the Trinity Cathedral in the Trinity Lavra of St. Sergius between 1425 and 1427. After Daniil's death, Andrei came to Moscow's Andronikov Monastery where he painted his last work, the frescoes of the Saviour Cathedral. He is also believed to have painted at least one of the miniatures in the Khitrovo Gospels.

The only work authenticated as entirely his is the icon of the Trinity (c. 1410, currently in the Tretyakov Gallery, Moscow). It is based on an earlier icon known as the "Hospitality of Abraham" (illustrating Genesis 18). Rublev removed the figures of Abraham and Sarah from the scene, and through a subtle use of composition and symbolism changed the subject to focus on the Mystery of the Trinity.

In Rublev's art two traditions are combined: the highest asceticism and the classic harmony of Byzantine mannerism. The characters of his paintings are always peaceful and calm. After some time his art came to be perceived as the ideal of Eastern Church painting and of Orthodox iconography.

Rublev died at Andronikov Monastery on 29 January 1430 (although 17 October 1428 is also cited). Rublev's work influenced many artists including Dionisy. The Stoglavi Sobor (1551) promulgated Rublev's icon style as a model for church painting. Since 1959 the Andrei Rublev Museum at the Andronikov Monastery has displayed his and related art.

The Russian Orthodox Church canonized Rublev as a saint in 1988, celebrating his feast day on 29 January and/or on 4 July. The liturgical calendar of the Episcopal Church in the United States of America remembers Rublev on January 29.

In 1966, Andrei Tarkovsky made a film Andrei Rublev, loosely based on the artist's life. This became the first (and perhaps only) film produced in the Soviet era to treat the artist as a world-historic figure and Christianity as an axiom of Russia’s historical identity, during a turbulent period in the history of Russia.