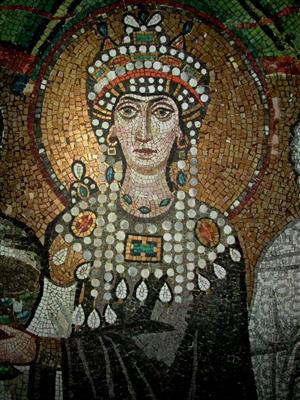 Mosaics were one of the most popular forms of art in the Byzantine Empire. They were extensively used to depict religious subjects on the interior of churches within the Empire and remained a popular form of expression from 6th century to the end of the Empire in the 15th century. After the fall of the Empire, many mosaics underwent destruction but many remained well-preserved and are extant to this day. The mosaic art of the Byzantine Empire exerted a significant influence on the Muslim art during the Omayyad and Abbasid caliphate and later in the time of Ottoman Empire.

Mosaics were initially used to depict religious figures such as Christ as well as different scenes from the Bible.The Emperor Constantine adopted Christianity and in 330 moved his capital from Rome to Constantinople (modern-day Istanbul), at the eastern frontier of the Roman Empire. Christianity flourished and gradually supplanted the Greco-Roman gods that had once defined Roman religion and culture. This religious shift dramatically affected the art that was created across the empire. Subsequently, the mosaics came to depict non-religious subjects as well.

Constantinople was the richest repository of Byzantine mosaics throughout the Empire’s history. The city was sacked in the 13th century and many notable buildings damaged. These buildings, including the Hagia Sophia church, the Pammakaristos Monastery, were restored later in the century and embellished with a new set of mosaics. Notable examples of original Byzantine mosaics of this period include those used in the decoration of the Chora Church in Constantinople.

By the time of Justinian’s reign in the 6th century, mosaics were being commissioned directly by the Emperor himself as well as the top bureaucracy. During Justinian’s rule, Italy came under the Byzantine rule and Justinian made the city of Ravenna his administrative centre. It was during this period that many grand structures were built in the city and these buildings were adorned with exquisite mosaics. These include the mosaics in Church of San Vitale, and the Basilica of Sant-Apollinare. The earliest of these mosaics in Ravenna were commissioned directly by Justinian or his wife. But the trend continued over subsequent centuries and many iconic mosaics of Ravenna date to 7th century.

During the 8th century, the Byzantine rulers decreed the use of any icons to be heretic. This included the depiction of religious figures which had been the dominant theme of Byzantine mosaics in previous centuries. As a consequence, many of the mosaics created during the previous centuries were destroyed during this period. After the ban on icons was lifted in the Empire, the creation of mosaics underwent a rapid revival. It was during this period from the 9th to 11th centuries that some of the most magnificent Byzantine mosaics were created. Most notable examples of mosaics during this period were made on the interior of the Hosios Loukas Monastery as well as the Nea Moni Monastery.

Between 1204 and 1261, the Byzantine Empire suffered another crisis: the Latin Occupation. Crusaders from Western Europe invaded and captured Constantinople in 1204, temporarily toppling the empire in an attempt to bring the eastern empire back into the fold of western Christendom. By 1261 the Byzantine Empire was free of its western occupiers and stood as an independent empire once again, albeit markedly weakened. The breadth of the empire had shrunk, and so had its power. Nevertheless Byzantium survived until the Ottomans took Constantinople in 1453. In spite of this period of diminished wealth and stability, the arts continued to flourish in the Late Byzantine period, much as it had before. Byzantine art and culture continued to live on in its far-reaching outposts, as well as in Greece, Italy, and the Ottoman Empire, where it had flourished for so long. The Russian Empire, which was first starting to emerge around the time Constantinople fell, carried on as the heir of Byzantium. Similarly, in Italy, when the Renaissance was first emerging, it borrowed heavily from the traditions of Byzantium.

by Medieval Chronicles and Khan Academy