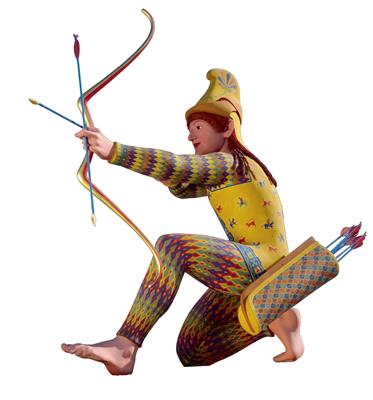 A color reconstruction of the sculpture thought to be Paris, the Trojan prince who killed Achilles, ca. 500 B.C

Very little is known of the Greek painters in ancient times, however, it is well know the mastery they could reach, by descriptions of some Roman writers. The Roman copies of Greek paintings also provide valuable information, since they greatly appreciate Greek techniques and styles, copying and reproducing them.

The most common and respected form of art, according to authors like Pliny or Pausanias, were panel paintings, individual, portable paintings on wood boards. The techniques used were encaustic (wax) painting and tempera. Such paintings normally depicted figural scenes, including portraits and still-lifes. Unfortunately, due to the perishable nature of the materials used and the major upheavals at the end of antiquity, not one of the famous works of Greek panel painting has survived, nor even any of the copies that doubtlessly existed, and which give us most of our knowledge of Greek sculpture. We have slightly more significant survivals of mural compositions. The most important surviving Greek examples from before the Roman period are the fairly low-quality Pitsa panels (c. 530 BC), and the Tomb of the Diver from Paestum (c.470 BC). The tradition of wall painting in Greece goes back at least to the Minoan and Mycenaean Bronze Age, with the lavish fresco decoration of sites like Knossos, Tiryns and Mycenae. It is not clear, whether there is any continuity between these antecedents and later Greek wall paintings.

Most Greek sculptures were painted in strong and bright colors; this aspect of Greek stonework is described as polychromy. The paint was frequently limited to parts depicting clothing, hair, and so on, with the skin left in the natural color of the stone or bronze, but it could also cover sculptures in their totality; female skin in marble tended to be uncoloured, while male skin might be a light brown. The painting of Greek sculpture should not merely be seen as an enhancement of their sculpted form, but has the characteristics of a distinct style of art. Basing on micropigment remains on greek relief and sculptures, it have been possible to obtain a representation on how they must have been look like in ancient times.