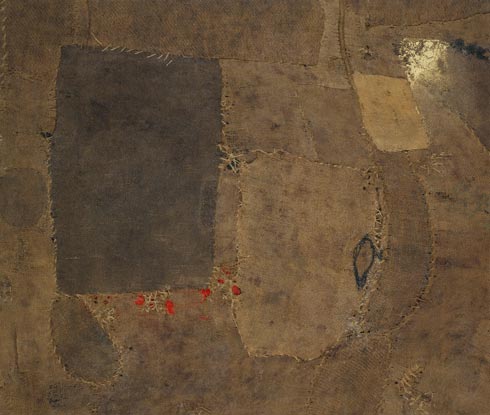 Composition is one of his Sacchi (sacks), a group of collage constructions made from burlap bags mounted on stretchers, which the artist began making in 1949. One of Burri’s first series employing nontraditional mediums, the Sacchi were initially considered assaults against the established aesthetic canon. His use of the humble bags may be seen as a declaration of the inherent beauty of natural, ephemeral materials, in contradistinction to traditional “high” art mediums, which are respected for their ostentation and permanence. Early commentators suggested that the patchwork surfaces of the Sacchi metaphorically signified living flesh violated during warfare—the stitching was linked to the artist’s practice as a physician. Others suggested that the hardships of life in postwar Italy predicated the artist’s redeployment of the sacks in which relief supplies were sent to the country.

Yet Burri maintained that his use of materials was determined purely by the formal demands of his constructions. “If I don’t have one material, I use another. It is all the same,” he said in 1976. “I choose to use poor materials to prove that they could still be useful. The poorness of a medium is not a symbol: it is a device for painting.” The title Composition emphasizes the artist’s professed concern with issues of construction, not metaphor. Underlying the work is a rigorous compositional structure that belies the mundane impermanence of his chosen mediums and points to art-historical influences. The Sacchi rely on lessons learned from the Cubist- and Dada-inspired constructions of Kurt Schwitters.

Despite Burri’s cool public stance, the Sacchi are examples of the Expressionism widely practiced in postwar Europe, where such work was called Art Informel (in the U.S. it was called Abstract Expressionism). Artists used powerfully rendered gestures and accommodated chance occurrences to express the existential angst characteristic of the period.