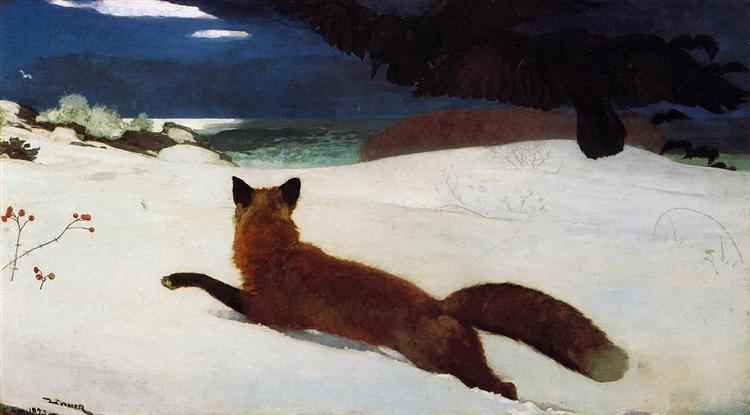 After 1890, Homer frequently depicted "naturalist" subjects - hunting and fishing in the Adirondacks and coastal or marine views at Prout's Neck, Maine. Critics have interpreted these works as potent expressions of Charles Darwin's theory of natural selection, an idea of great currency in the late 19th century. Fox Hunt was Homer's largest canvas. He dramatized the brutal realities of winter on the Maine coast by showing a fox desperately bounding through deep snow in an attempt to flee a flock of half-starved crows. The birds descend ominously with outstretched wings, forming a dark hovering mass above the struggling fox. However, the sharp diagonal created by the fox, matched by the artist's signature in the lower-left corner, suggests a sense of motion for the animal and allows the viewer to determine the conclusion to this dramatic scene.

That viewers witness the scene from the fox's vantage point heighten's sense of tension and empathy. Homer's carefully designed composition, indebted to his study of Japanese woodblock prints ( seen on his Paris trip in 1876), supports the unfolding drama. The fox's red silhouette is splashed across a field of oppressive snow; we sense that he is cornered, trapped within the flattened white plane while the aggressive birds break its edges on the descent. This striking reversal of the natural order, in which the bird becomes predator and the fox prey, has become one of the artist's most haunting and successful images. The Pennsylvania Academy purchased Fox Hunt in 1893, the first of Homer's works to enter a public collection.

Fox hunting is an activity involving the tracking, chase and, if caught, the killing of a fox.

Fox hunt may refer to:

The Fox Hunt may refer to:

Fox hunting may refer to: