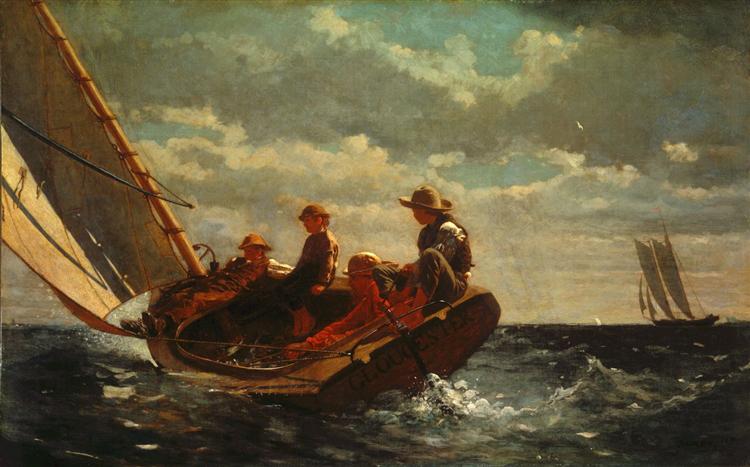 Breezing Up (A Fair Wind)

Homer developed a penchant for forceful realism early in his career. Following an apprenticeship in a Boston lithography shop, he supported himself as a freelance illustrator, creating a wide variety of popular images that subsequently were published as wood engravings in national periodicals like Harper's Weekly. During the early 1860s, his themes ranged from the stylish seaside-resort life to the horrors of the battlefield. Following an extended trip to Europe in 1866–1867, Homer adopted a warmer palette, a looser brush technique, and an interest in painting outdoor scenes that owed much to the influence of contemporary French artists such as Courbet, Manet, and Monet.

Upon his return to the United States, Homer turned his attention to lively scenes of sports and recreation, painting warm and appealing images that perfectly suited the prevalent postwar nostalgia for a simpler, more innocent America. Breezing Up (A Fair Wind), painted during the country's centennial year, has become one of the best–known and most beloved artistic images of life in 19th–century America.

Exhibited to critical praise, Breezing Up (A Fair Wind) shows a working father and his three sons on a catboat in the afternoon. Similar to a modern-day snapshot, the fishing boat seems about to speed out of view, the top of its mast already cropped out of the painting. Contrasting the sense of determined movement of the small craft in the foreground, a large sailboat leisurely crosses in the far background. Like his earlier works, Homer realistically depicted the scene, without a touch of sentiment. The stern look on the father's face as he steers the small boat is contrasted by the youthful postures of his sons, lost in their own thoughts, not quite attuned to the pressures of the adult's world. Perhaps this subtle contrast helped make the work one of Homer's most-loved depictions.

This simple painting, which appears so quintessentially American in tone demonstrates the influence of his brief stay in France in the previous decade. The subject reflects concerns he shared with the Realist painters of France who similarly put the working figures in the immediate foreground of the composition. There is also a shift in Homer's gestural brushstrokes, which became increasingly confident after his trip to Paris, most notably in the sky and the sea. Finally, the compositional structure reveals a debt to the lessons of Japonism - the juxtaposition of extremely close-up objects against those in the deep background are seen from a slightly elevated position. In both style and subject, Breezing Up anticipates themes that will resurface and dominate his oeuvre after his second trip to Europe in 1881.

Breezing Up (A Fair Wind) is an oil painting by American artist Winslow Homer. It depicts a catboat called the Gloucester chopping through that city's harbor under "a fair wind" (Homer's original title). Inside the boat are a man, three boys, and their catch.

Homer began the canvas in New York in 1873, after he had visited Gloucester, Massachusetts, where he first worked in watercolor. He used the sketches made there, of which the most closely related is Sailing the Catboat (1873), for the oil painting, which he worked on over three years. Infrared reflectography has revealed the many changes he made to the composition during this time, including the removal of a fourth boy near the mast and a second schooner in the distance. At one point the adult held both the sheet and the tiller, a position initially adapted from an oil study of 1874 titled The Flirt. The painting's message is positive; despite the choppy waves, the boaters look relaxed. The anchor that replaced the boy in the bow was understood to symbolize hope. The boy holding the tiller looks forward to the horizon, a statement of optimism about his future and that of the young United States.

The finished work indicates that the significant influence of Japanese art on Western painters in the 19th century also touched Homer, particularly in the compositional balance between the left (active) and right (sparse) halves. Homer had visited France in 1866 and 1867, and the influence of marine scenes by the French painters Gustave Courbet and Claude Monet is apparent as well. Not all of Homer's sea pictures are so benevolent as Breezing Up: he portrayed waves crashing ashore as did Courbet (see for example The Wave, c. 1869). Monet's relatively early paintings Seascape: Storm (1867) and The Green Wave (1866) show boats on somewhat turbulent seas.

Completed in the centennial year 1876, the painting was first exhibited at the National Academy of Design that year, then at the Centennial Exposition in Philadelphia. By 1879, it had come to be known as Breezing Up, a title that was not the artist's but one which he did not seem to object to. A contemporary critic described the painting: "It is painted in [Homer's] customary coarse and negligé style, but suggests with unmistakable force the life and motion of a breezy summer day off the coast. The fishing boat, bending to the wind, seems actually to cleave the waves. There is no truer or heartier work in the exhibition." Another wrote, "Much has already been said in praise of the easy, elastic motion of the figures of the party in the sailboat, which is scudding along through blue water under 'a fair wind.' They sway with the rolling boat, and relax or grow rigid as the light keel rises or sinks upon the waves. Every person who has been similarly situated can recall how, involuntarily, his back stiffened or his knees bent as he felt the roll of the waves beneath him."

Today, Breezing Up is considered an iconic American painting, and among Homer's finest. The National Gallery of Art purchased the work in 1943, described by the institution's web site as "one of the best-known and most beloved artistic images of life in nineteenth-century America."