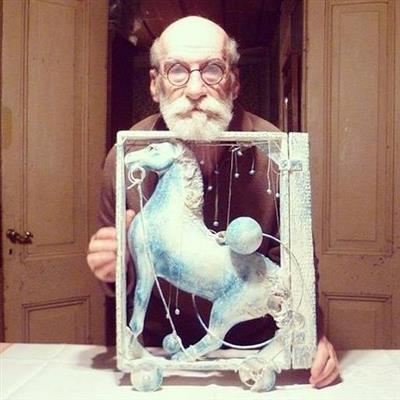 Vigen Vartanov at his home.

Collages and assemblages of Vigen Vartanov are unique worlds created from old objects found on the streets, to which the artist gives a chance to live one more life. These worlds to this day lived only within the Artist's apartment walls and had never seen the bright light of the exhibition halls. Vigen Vartanov did not like publicity and all his life refused to exhibit. This exposition is the first attempt to acquaint the viewer with his work - take it out of his Tbilisi apartment.
Vigen Vartanov was born and lived all his life in an old house on Plekhanov Avenue (now David Agmashenebeli). Since childhood, fond of cinema, he dreamed of becoming a cinematographer. In 1967 he started working at the film studio "Georgia-Film" as an artist-photographer. For thirty years of his career at the film studio he took part in the making of fourteen films of prominent directors of Georgian cinema. Back then, he didn't have a photo camera or a laboratory of his own, he'd borrow it from the studio to follow his passion. His artistic and complex black and white photographs of the late 60's - early 70's did not quite fit into the aesthetic requirements of those years.  Thus, Vigen never published or exhibited his photographic work.
His endless walks with a camera around the city led to the emergence of interest in the history of Tbilisi. The old photographs, documents and everyday objects became a part of his life, and this was subsequently reflected in many of his collages and assemblages. The technique of collage was not new to Vigen, as prior to that he practiced it in photography, doing double exposures or combining two or three negatives to obtain the desired image. Between the years of 1978 and 1980, Vigen created over 50 collages, including those for S.I. Parajanov's movie "The Confession."
In early 70's, Vigen came across a catalogue of works by an American artist Joseph Cornell, and Cornell's 'boxes' inspired Vigen to "betray the photography" and start looking for new ways of creative self-expression in collages and, as he called his work, "object compositions".
Between 1975 and 2015, Vigen Vartanov created more than 150 assemblages, using a variety of materials and items that he mostly found on the streets.  Rusted sheets of tin and construction mesh, old suitcases, forged nails, dials and gears of watches, liners and charred musical instruments, found home in his works.
For both the multi-layered flat collage, and three-dimensional assemblage, it was not a simple set of individual objects. All these objects are connected by meaning and are interconnected by various kinds of extensions, suspensions, combined by a faint of decaying tissues, nets of ropes and iron. In Vigen's artworks items are given different texture and color, it's like a pictorial art, but instead, the Artist works with various auxiliary materials, such as ash, scobs, cement, mixed with paints.
This exhibition is presenting about sixty collages and assemblages by Vigen Vartanov, belonging to different periods of his work. Vigen Vartanov always refused to exhibit, using an excuse: "Not yet, some time later ... ". During the life of the artist, the "later" never happened.