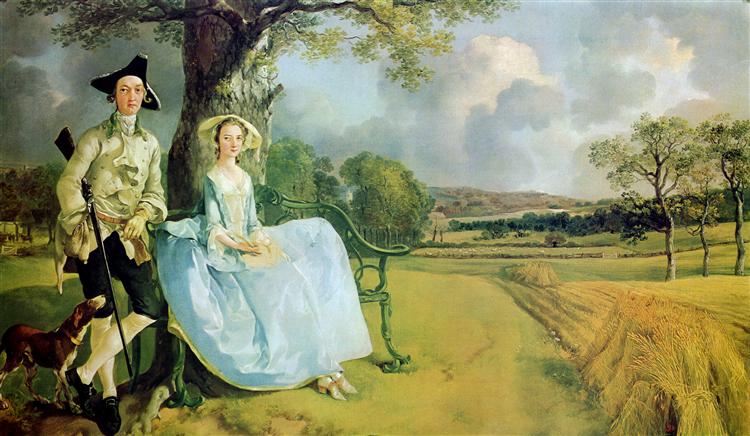 Thomas Gainsborough was twenty-one when he painted Mr and Mrs Andrews in 1750. At that time landscape painting was far less prestigious and poorly paid compared to portraits and Gainsborough was forced (since the family business, a clothiers' in Sudbury, had been bankrupted in 1733) to "face paint" as he put it. Mr and Mrs Andrews contains the widest landscape of Gainsborough's portraits, and he would not return to such compositions. Future paintings would be set against neutral or typical rococo settings.

Mr and Mrs Andrews is an oil on canvas portrait of about 1750 by Thomas Gainsborough, now in the National Gallery, London. Today it is one of his most famous works, but it remained in the family of the sitters until 1960 and was very little known before it appeared in an exhibition in Ipswich in 1927, after which it was regularly requested for other exhibitions in Britain and abroad, and praised by critics for its charm and freshness. By the post-war years its iconic status was established, and it was one of four paintings chosen to represent British art in an exhibition in Paris celebrating the Coronation of Queen Elizabeth II in 1953. Soon the painting began to receive hostile scrutiny as a paradigm of the paternalist and capitalist society of 18th-century England, but it remains a firm popular favourite.

The work is an unusual combination of two common types of painting of the period: a double portrait, here of a recently married couple, and a landscape view of the English countryside. Gainsborough's work mainly consisted of these two different genres, but their striking combination side-by-side in this extended horizontal format is unique in Gainsborough's oeuvre, and extremely rare in other painters. Conversation piece was the term for a portrait group that contained other elements and activities, but these normally showed more figures, set engaged in some activity or in an interior, rather than a landscape empty of people.

Gainsborough was later famously given to complaining that well-paid portrait work kept him away from his true love of landscape painting, and his interest probably combined with that of his clients, a couple from two families whose main income was probably not from landowning, to make a more prominent display than was normal in a portrait of the country estate that had formed part of Mrs Andrews' dowry.

Thomas Gainsborough was about twenty-three when he painted Mr and Mrs Andrews in 1750. He had married the pregnant Margaret Burr and returned to Sudbury, Suffolk, his home town as well as that of the Andrews, after an apprenticeship in London with the French artist Hubert-François Gravelot, from whom he learnt the French rococo style. There, he also picked up a love of landscapes in the Dutch style. However, landscape painting was far less prestigious and poorly paid compared to portraits and Gainsborough was forced (since the family business, a clothiers' in Sudbury, had been bankrupted in 1733) to "face paint" as he put it. Mr and Mrs Andrews contains the widest landscape of Gainsborough's portraits, and he would not return to such compositions. Future paintings would be set against neutral or typical rococo settings. It has been speculated that Gainsborough wished to show off his landscape ability to potential clients, to satisfy his personal preference, or his sitters' wishes.

The relatively small size of the painting, just 2 feet 3 inches (69 cm) high, is typical of both Gainsborough's portraits and landscapes at this early period. Later he painted larger portraits approximating life-size for a grander London clientele than his early depictions of local gentry, and the landscape backgrounds he used were mostly of woods and very generalized. Both his landscape backgrounds to portraits and his pure landscapes tend to show woodland, and the open farmland view seen here is unusual, especially as it begins so close-up to the viewer. Like most pure landscape paintings, Gainsborough's normally showed a view all seen from a certain distance, and that this landscape sweeps away from a foreground very close to the viewer is a feature necessitated by and typical of the portrait, though one that greatly adds to the success of the painting. As with almost all artists of the period, it was not Gainsborough's practice to paint outdoors, and Mrs Andrews did not in reality have to walk in her silk clothes across the fields to pose, one of the aspects of the work commented on disapprovingly by some modern writers.