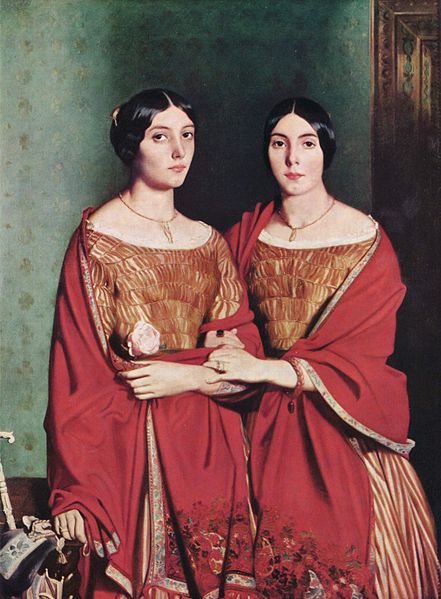 The Two Sisters (of the artist)

The Two Sisters is an 1843 oil painting on canvas by the French romantic artist Théodore Chassériau. Completed when the artist was twenty-three years of age, it depicts Chassériau's sisters Adèle and Aline. It is housed in the Musée du Louvre in Paris, France.

The work is a product of Chassériau's early maturity, when he was eager to demonstrate his independence form his former master, J.A.D. Ingres, with whom he had had a falling-out in 1840. When the painting was exhibited in the Salon of 1843, the response of the critics and the public was mixed. One critic, Louis Peisse, wrote:

Although the representation of the identically dressed sisters suggests twinship, Adèle (on the left) was thirty-three and Aline (on the right) was twenty-one when they posed for the portrait.

By the time of Chassériau's death in 1856, The Two Sisters was regarded as one of his most important works. It entered the collection of the Louvre in 1918.