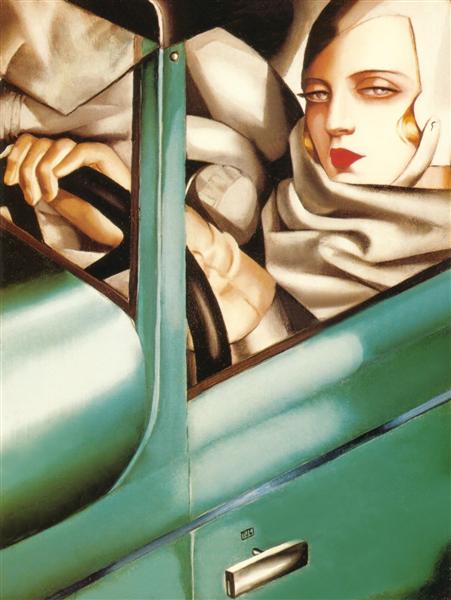 My Portrait (Self-Portrait in the Green Bugatti)

In what is probably her most famous painting, Lempicka depicts herself sitting at the wheel of a green Bugatti sports car, wearing fashionable brown driving gloves, a close-fitting hat that resembles a helmet, and a scarf that billows in dramatic, sharp folds to her right. The folds of the fabric, the chrome details so directly exemplary of Art Deco-style details, and the striking lighting provide the impression of speed as if the painting captures a fleeting moment. In its issue of October 3rd, 1928, the very widely read weekly Vu published a cover picture by André Kertèsz, featuring a young lady at the wheel of a sports car. The picture caption specified that the model's sports outfit, her gloves, and her leather cap, were all from Hermès. Lempicka wears exactly the same accessories in her self-portrait, which was obviously inspired by the Kertèsz photo.

The work offers a new image of a modern woman - of unabashed self-determination and unapologetic sexuality. The artist's expression is controlled and dispassionate as she gazes directly at the viewer, appropriating the traditional male gaze and contradicting traditional depictions of women who are meant to be viewed exclusively by male viewers as sex objects.

The painting was commissioned for the front cover of Die Dame, a German magazine devoted to promoting the concept of the modern woman. This work exemplifies how Lempicka's work occupied a kind of liminal niche between fine art, portraiture to be specific, and graphic art. Unlike her male colleagues whose Cubism-inspired work included portraits and genre images, Lempicka's work, even in her day, was often considered within the context of the decorative arts.