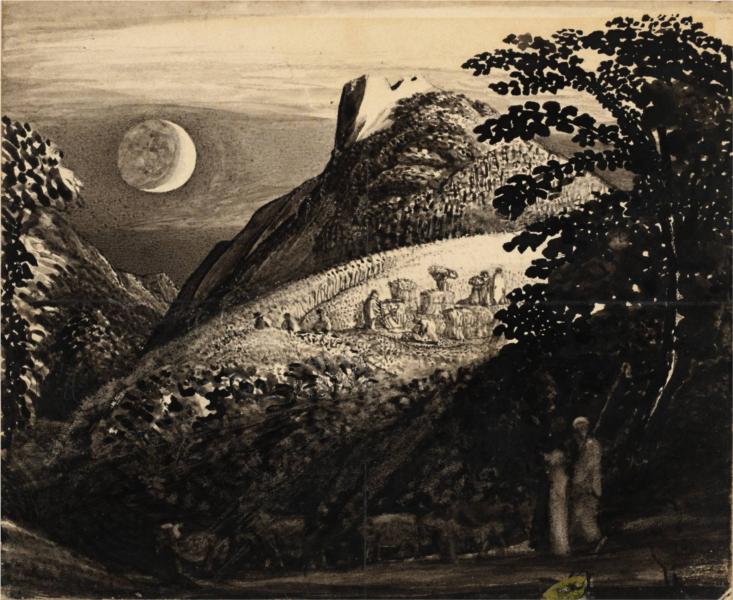 The Harvest Moon. Drawing for ‘A Pastoral Scene’ 1832

This work is a study for a A Pastoral Scene, 1835, a work in oil and tempera, now in the Ashmolean Museum, Oxford. Typical of this period in Palmer's oeuvre, it represents a pastoral landscape: a shepherd and shepherdess tend their flock of sheep in the foreground, while harvesters gather up the glowing ripe corn in the fields and a crescent moon rises in the distance. The composition combines elements from the landscape around Shoreham, where Palmer was living, and the craggy shoreline of North Devon, which he had visited in 1834. The Devon scenery made an important impact on him, and, as his son, A.H. Palmer, later recalled, 'even before he had explored it, [it] seems to have commended itself to my father's affections, and afterwards became his ideal of English Scenery' (A.H. Palmer, The Life and Letters of Samuel Palmer, 1892, p.55.)
Shoreham and the Darent valley also appealed to Palmer and seemed to represent a perfect, neo-Platonic world. In his pictures he attempted to create an image of fertility and pastoral contentment, unaffected by the outside world. These works were partly inspired by William Blake's (1757-1827) illustrations to Ambrose Philips' imitation of Virgil's First Eclogue (1821). Palmer could have been describing his own work when he wrote of the Blake engravings: 'They are visions of little dells, and nooks, and corners of Paradise; models of the exquisitist pitch of intense poetry…There is in all such a mystic and dreamy glimmer as penetrates and kindles the inmost soul' (Palmer, pp.15-16).
The profile of the hill closely resembles that of the hill in Landscape in the Roman Campagna by Gaspard Poussin in the Dulwich Gallery, which Palmer often visited. The characteristic rounded hills of Shoreham and the crescent moon were later adopted as motifs by artists of the mid-twentieth century. Often inspired by Milton's poetic evocations, moonlight was a recurring feature in Palmer's work, representing a divine presence in nature.
Palmer's works of this period are characterised by a deliberate archaism or primitivism and stylistically they were influenced by the work of such fifteenth and sixteenth century Northern European artists as Dürer, Breughel, Lucas Van Leyden and Giulio Bonasone, as well as Blake.