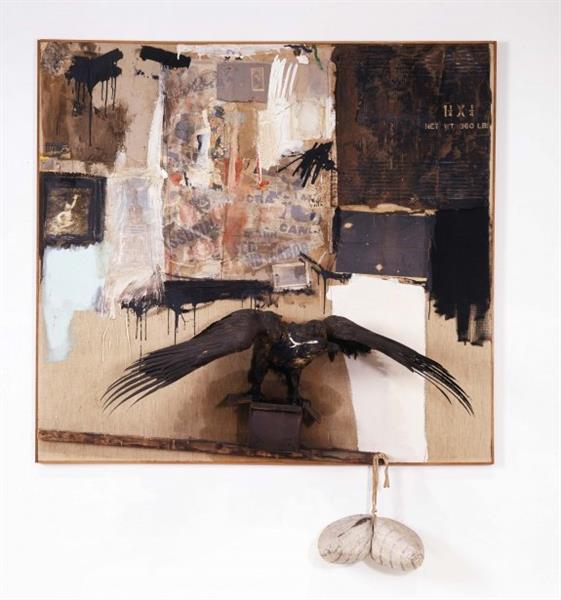 Among Rauschenberg's most iconic and controversial combines, Canyon features amongst its mixed media; pieces of wood, a pillow, a mirror, and a stuffed bald eagle. The eagle appears to emerge directly from the canvas, perched on top of a cardboard box and peering down on a pillow dangling below the assemblage. A photograph of Rauschenberg's son emerges from the incongruous cacophony of objects, boldly outlined with black above a mint green patch of paint so that it stands out amidst the fragments of printed matter.

Rauschenberg acquired the taxidermied eagle from fellow artist Sari Dienes, who retrieved the bird from the detritus of a recently departed neighbor that had shot the bird during his time as one of the last of Teddy Roosevelt's Rough Riders. While Rauschenberg submitted a notarized letter in 1988 that the bird was killed well before the 1940 Bald and Golden Eagle Protection Act went into effect, the stuffed eagle still became the source of recent governmental ire. In 2007, the estate of the former owner - Ileana Sonnabend - declared that Canyon was of zero value because it could not be sold without violating the 1940 Bald and Golden Eagle Protection Act. However, in 2011, the United States government appraised the work at 15 million dollars, and also levied a penalty for an undervaluation at Sonnabend's heirs. In the end, the U.S. government dropped the 40 million plus dollar claim against Sonnabend's estate after the work was donated to the Museum of Modern Art. While the eagle became the source of immense bureaucratic drama over the course of many years, it is also the most potent source of allegory and imagery within the work. Critics cite references ranging from nationalism in the guise of McCarthyism to the Greek Ganymede myth embedded within the taxidermied bird, yet Rauschenberg always left the interpretation open to the viewer.