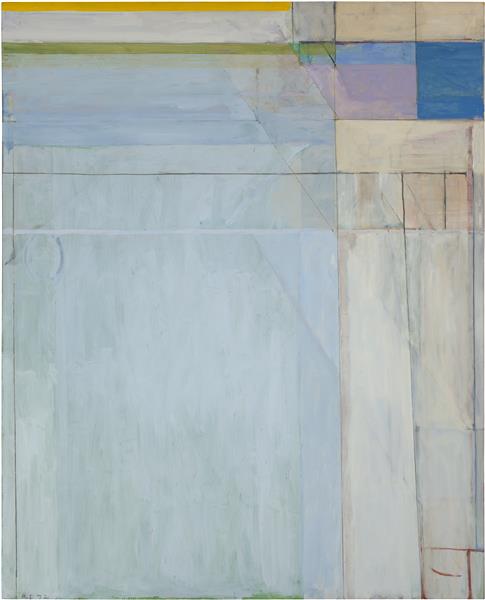 Ocean Park is the name of the area of Santa Monica where Diebenkorn had his studio; in fact, the views in the paintings may have been based on the view from the studio window. If both his Abstract Expressionist paintings and his Ocean Park represent aerial landscapes, the former are intuitive and impulsive, while the latter are coldly delineated and rational spaces. A comparison of the two shows just how far Diebenkorn's abstract vocabulary had evolved throughout his career. The painting marks a sharp contrast with the organic forms of his Abstract Expressionist work of the 1950s, showing a much more geometric and planned approach. This painting also shows his appreciation for the teachings of modernism and, in this case, the work of Piet Mondrian specifically.

Here, Diebenkorn worked within Mondrian's conceptual grid framework and applied lighter washes of predominantly pastel colors to his squared-off composition. His inspiration still comes from the landscape, but now it is specifically the light-filled southern California landscape. Like the Impressionist painters who also worked in series, Diebenkorn based his 140 Ocean Park paintings on the changing atmospheric effects and conditions that he perceived. There is elegance in the design and palette of this painting that only comes of being a mature painter. Although composed of flat, neat, and rectilinear planes that evoke a sense of space, the emphasis is still on the process of painting itself, with evidence of the artist's thoughts, as he scored and reworked the surface many times.