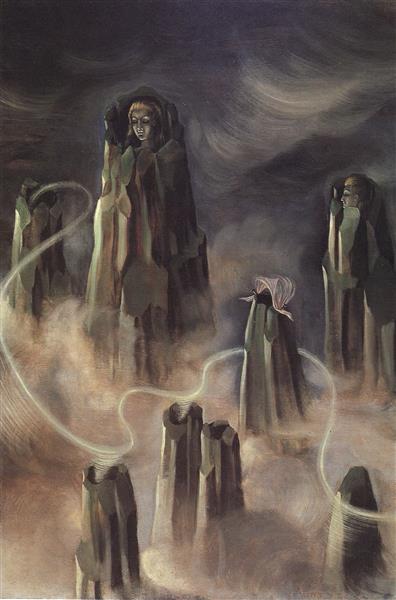 The Souls of the Mountain

The Souls of the Mountains is one of the few artworks of Remedios Varo painted outside of Mexico. It was made in Paris, during Varo’s first years of stay in the city, in a newly discovered world, occupied by Nazis. The essence of the painting allows us to catch a glimpse of the interwar French bourgeoisie’ views of the woman and, more specifically, of the woman as an artist. The encased female characters in the artwork appear to be trapped inside the confining crust of the world, with only mist and darkness around them, in an unawakened state. Depicting the characters in such a manner, Varo evokes her inner feeling of isolation and shows the struggle of being a woman in that day and era.

The mountains can be viewed as phallic symbols, or as a very thick, rock-hard mask the artist has to keep on to be accepted in the male-dominated art world she was then a part of. Female artists of this era were disregarded by the male artists, and were scaresly viewed as equals or as a real artists, hustled in the shadow of their painter spouses or partners. The cold-toned, gloomy palette of the painting was chosen to depict feelings of isolation and a hibernating state of the characters that want to escape their confinement. Dark and neutral misty strokes portray indecisiveness and uncertainty, but also Varo’s hazy vision of her future and surroundings. To create this tableau, Varo applied a frequently used surrealist technique of fumage, smoking the oil painted canvas to build up tension inside the gloomy atmosphere of the painting. This particular technique was used to limit the artist’s control over the painting, making room for the unconscious mind to guide the smoke of a candle flame into the desired shape and shade. The smoke, imprinted in the canvas, was then feathered away to make smooth patterns of clouds and mist, which in turn balance out the rocky, dominant shape of the mountains.
The title of the painting induces the idea that there is a life force under oppression which denies its freedom and right to be acknowledged; the souls should be freed of their confinement in order to be able to express themselves fully and without any restrictions from their surroundings, which in the artist’s case come from the patriarchal society.