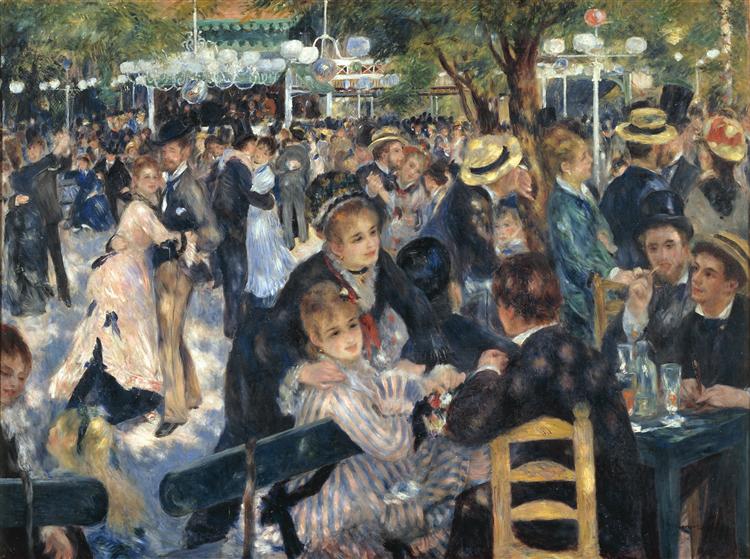 Dance at Moulin de la Galette is one of Impressionism’s most highly revered masterpieces. The scene is of a Sunday afternoon at Moulin de la Galette, where Parisians would typically dress up and spend all day dancing, drinking, and eating galettes, or flat cakes. The painting was in the collection of Gustave Caillebotte, but it was claimed by the French government upon his death due to the non payment of death duties. It was later transferred from the Luxembourg Museum, to the Louvre, and then later to the Musee d’Orsay. Its sale price at auction in 2009 was the fifth highest price ever paid for a painting at auction.

Bal du moulin de la Galette (commonly known as Dance at Le moulin de la Galette) is an 1876 painting by French artist Pierre-Auguste Renoir. It is housed at the Musée d'Orsay in Paris and is one of Impressionism's most celebrated masterpieces. The painting depicts a typical Sunday afternoon at the original Moulin de la Galette in the district of Montmartre in Paris. In the late 19th century, working class Parisians would dress up and spend time there dancing, drinking, and eating galettes into the evening.

Like other works of Renoir's early maturity, Bal du moulin de la Galette is a typically Impressionist snapshot of real life. It shows a richness of form, a fluidity of brush stroke, and a flickering light.

Renoir painted a smaller version of the picture (78 × 114 cm) with the same title. The painting is now believed to be in a private collection in Switzerland. Apart from their size, the two paintings are virtually identical, although the smaller is painted in a more fluid manner than the d'Orsay version. One is presumably a copy of the original, but it is not known which is the original. It is not even known which was the one first exhibited at the 3rd Impressionist exhibition of 1877, because although the painting was catalogued and given favourable attention by critics, its entry did not indicate the size of the painting, information that would serve to identify it.

For many years it was owned by John Hay Whitney. On May 17, 1990, his widow sold the painting for US$78 million at Sotheby's in New York City to Ryoei Saito (Saitō Ryōei), the honorary chairman of Daishowa Paper Manufacturing Company, Japan.

At the time of sale, it was one of the top two most expensive artworks ever sold, together with van Gogh's Portrait of Dr. Gachet, which was also purchased by Saito. Saito caused international outrage when he suggested in 1991 that he intended to cremate both paintings with him when he died. However, when Saito and his companies ran into severe financial difficulties, bankers who held the painting as collateral for loans arranged a confidential sale through Sotheby's to an undisclosed buyer. Although not known for certain, the painting is believed to be in the hands of a Swiss collector.

As of January 2013 the Bal du moulin de la Galette is sixth (when adjusted for the consumer price index) on the list of most expensive paintings ever sold.

Renoir conceived his project of painting the dancing at Le Moulin de la Galette in May 1876 and its execution is described in full by his civil servant friend Georges Rivière in his memoir Renoir et ses amis. In the first place, Renoir needed to set up a studio near the mill. A suitable studio was found at an abandoned cottage in the rue Cortot with a garden described by Rivière as a "beautiful abandoned park". Several of Renoir's major works were painted in this garden at this time, including La balançoire (The Swing). The gardens and its buildings have been preserved as the Musée de Montmartre.