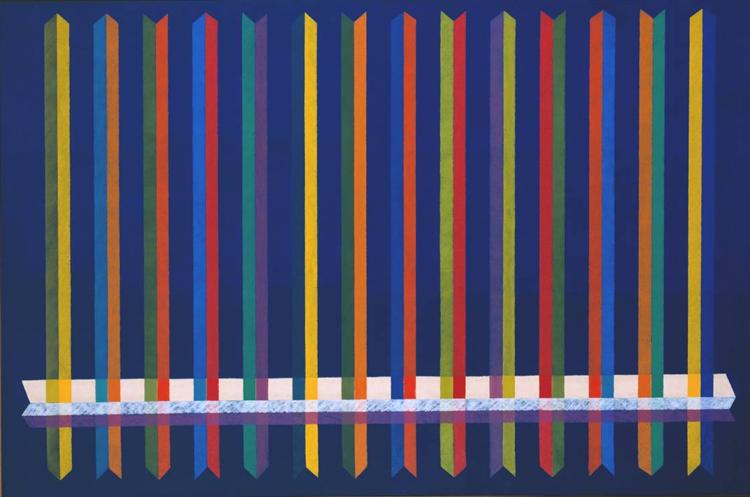 The artist wrote (11 April 1966) that 'Molto a Punta' was completed in November-early December 1965. 'I have painted two such paintings [the other being "A Punta", no.34 in the same exhibition] ... but I have in mind more of them. Not really as a series but as various attempts to achieve a certain degree of severe but sensual clarity and physical dignity by the use of strong, abstract colors in a certain sequence and scale. Like an heraldic flag or something which is physically emanating a strong severe impact inviting to look in depth and feel some presence, some convincing fact confronting the viewer with its physical evidence, characters and qualities. I will say more about this later. I have of course painted some smaller pictures on the same theme which don't come off at all with the same effect for obvious reasons of scale.

'"A punta" in Italian means "pointed" or "sharp" that is hostile or "on the alert" or ready to push back or repel, let's say also "not easy to get" unless you are aware that the point is there; the opposite of "smooth" or "round" or "soft", "on guard" and so on ... I have kept this expression "a punta" in mind for some time and when I had to title these pictures it came back to me as conveying a mood or a state of mind somehow akin to the image or the mood which the picture gave me once I saw it completed ...

'The elements I was trying to see in these two large pictures are: 1) A possibility of attempting some perception of depth through a still composition where movement or rather rhythm would be provided by a succession of colors. A kind of depth as a reversible dimension and direction, a sense of existence in some other direction than in height or length but in a non measurable non definite direction. A purely perceptual depth not an illusion of depth ... I sense something of value there, some possibility of seeing and perceiving beyond the two dimensional modern tradition. Space and light, structure and color etc. 2) Thus the optical effect would be to convey this perceptual depth through light displayed in a succession of transparent color bands organized in an easily readable structural combination from the ground to the final surface of the painting all throughout this bidimensional surface itself.

'I used a dark ground and intense deep colors for the first time in these two paintings and this conveys a sense of severe stillness rather than sensual or joyous movement as in some other paintings involving the same attempt but by another technique and approach. These other previous attempts did not achieve as much because of their color scale that was in a way too open, mobile and not still, deep or severe or austere enough as in "Molto a punta". Technically I tried to give oil painting the aspect of a solid mural painted on a live material (like canvas) rather than its conventional although modern look. I tried to keep the color intense but transparent and light conveying as much as possible the natural qualities of such medium. I tried very hard to make a succession of colors work in a sequence of bands on a deep blue ground in such a way that they would not be segregated from the ground but trying to make them work together with it.'