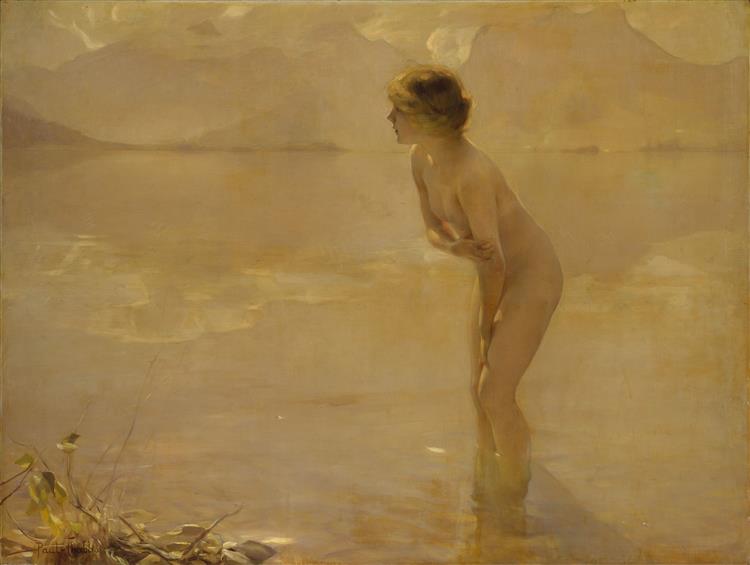 Matinée de Septembre (English: September Morn) is a controversial oil painting on canvas completed in 1911 by the French artist Paul Émile Chabas. Painted over several summers, it depicts a nude girl or young woman standing in the shallow water of a lake, prominently lit by the morning sun. She is leaning slightly forward in an ambiguous posture, which has been read variously as a straightforward portrayal of protecting her modesty, huddling against the cold, or sponge bathing. It has also been considered a disingenuous pose permitting the "fetishisation of innocence".

September Morn was first exhibited at the Paris Salon of 1912, and although the identity of its first owner is unclear, it is certain that Leon Mantashev acquired the painting by the end of 1913. It was taken to Russia, and in the aftermath of the October Revolution of 1917 was feared lost. It resurfaced in 1935 in the collection of Calouste Gulbenkian, and after his death in 1955 was sold to a Philadelphia broker, who donated it anonymously to the Metropolitan Museum of Art (the Met) in 1957. As of 2014 it is not on display.

From 1913 on, reproductions of the painting caused controversy in the United States. An art dealer in Chicago was charged with indecency and another in New York was targeted by anti-vice crusader Anthony Comstock, both after displaying September Morn. Over the next few years the work was reproduced in a variety of forms, including on pins and calendars, while censorship and art were debated in newspapers. Chabas' painting inspired songs, stage shows and films; eventually some 7 million reproductions were sold, though Chabas – who had not copyrighted September Morn – did not receive any royalties.

Although several women claimed to be the model for September Morn, Chabas never revealed her identity. He described the work as "all I know of painting", and responded positively to statements that it was his masterpiece. Later writers, however, have described the painting as kitsch, valuable only as a historic artifact.

September Morn depicts, from an oblique point of view, a naked blonde girl or young woman standing ankle-deep in the water near the shoreline of a tranquil lake surrounded by hills. The figure is backlit by the morning sun, but fully visible, if a little darker than her surroundings. Her arms are folded about her body, her right arm passing below her breasts as she grasps her left elbow, while her left arm conceals her pubic area. This pose has been variously interpreted as the subject protecting herself from the cold, covering her modesty, or sponge bathing, or as the artist's "fetishisation of innocence".

Reviews in 1912 noted that the painting was dominated by grays: those of her shaded body, the blue-grays of the September water, the green-grays of the sky, and the pink-grays of the hills behind her. The art critic François Thiébault-Sisson described this as evoking the morning, the young subject preparing to bathe while "light grey vapours are still floating over the lake". This oil painting on canvas measures 163.8 by 216.5 centimetres (64.5 by 85.2 in), and Chabas's signature is located in the lower left.