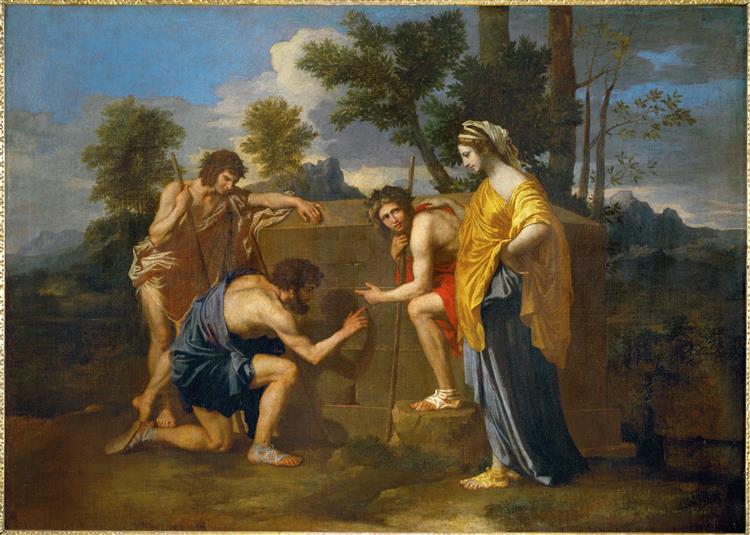 Classicism was a separate trend in Baroque European painting, a style of art in which adherence to accepted aesthetic ideals takes precedence over the individuality of expression. In simple terms, it was a restrained, harmonious style that believed in the primacy of design, rather than color or expression. During the Baroque era of the 17th century, the classical tradition was personified by the French artist Nicolas Poussin, who spent most of his career in Rome. Poussin is probably best known for his mythological painting like Abduction of the Sabine Women (c.1634) and Et in Arcadia Ego (c.1638), although he was also an important pioneer of classical arcadian landscape painting - a genre dominated by another French painter based in Rome, Claude Lorrain. Like Poussin and Lorrain, Simon Vouet also spent a major part of his career in Rome, before returning to Paris as court painter to King Louis XIII. He was noted, in particular, for his muted style of Baroque painting, which avoided both the extreme naturalism and drama of Caravaggio, and the contrived painterly effects of the more intense Italian Baroque art.

In general, the aesthetic of classicism was chiefly preoccupied with the overall balance and harmony of composition rather than finely-rendered detail. While the classical painting is quite realistic, individual features and textures are nonetheless often simplified, since these are of secondary importance. Consequently, the elements of a classical composition (e.g. human bodies and faces, landscape features) take on a similar, generic appearance as they are idealized (i.e. as the irregular and inharmonious aspects of the real world are smoothed away).