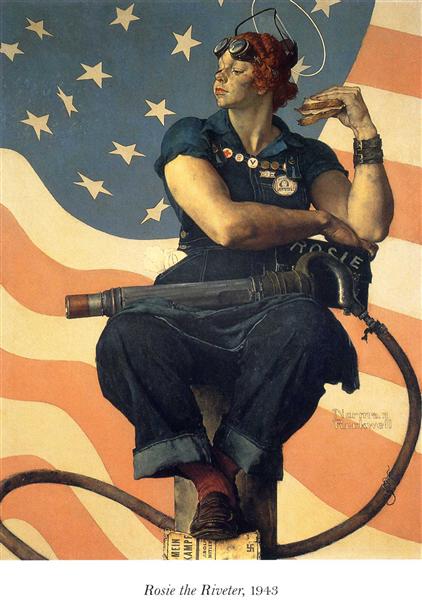 Norman Rockwell Fair Use
last edit: 7 May, 2020 by xennex

Normal Rockwell adored the history of art. It is evident in Rosie the Riveter, the Saturday Evening Post cover of May 29, 1943.

The painting portraits a burly woman, taking her lunch break, eating a sandwich. Rosie has a dirty face and dirty arms, a metallic lunch with her name under an arm, and a rivet gun on her legs. She wears work clothes: an oversized overalls and a blue shirt, which shows the woman's muscular, masculine arms. The work glasses are on her forehead, her stockings are red, and she has male moccasins on her feet. Under the feet, a copy of Mein Kampf, by Adolf Hitler: through this detail, the artist is implying superiority to Nazi's ideology.

Rosie had a purpose: after Japan bombed Pearl Harbor, US intervention in World War II, and the consequent increase of men in the military, the Government launched propaganda campaigns, targeted women to enter the workforce. The woman's clothes, blue, red, and with a white handkerchief, recall the colors of the American flag that Rockwell paints as the backdrop of the work: Rosie is the symbol of each of the female workers who build American freedom, all those women called to perform male work while husbands were at the front, fighting overseas.

Rockwell used two inspiration for his Rosie: the pose of the woman is based on Michelangelo's Sistine Chapel Prophet Isaiah (1511), showing his deep knowledge of the history of art and his ability to use high models to paint his everyday life subjects.

Rockwell’s model was a Vermont resident, then 19-year-old Mary Doyle Keefe who was a telephone operator near where Rockwell lived, not a riveter. Rockwell painted his Rosie as a larger woman than his model, and he later phoned to apologize. The Post’s cover image proved hugely popular, and the magazine loaned it to the U.S. Treasury Department for the duration of the war, for use in war bond drives.