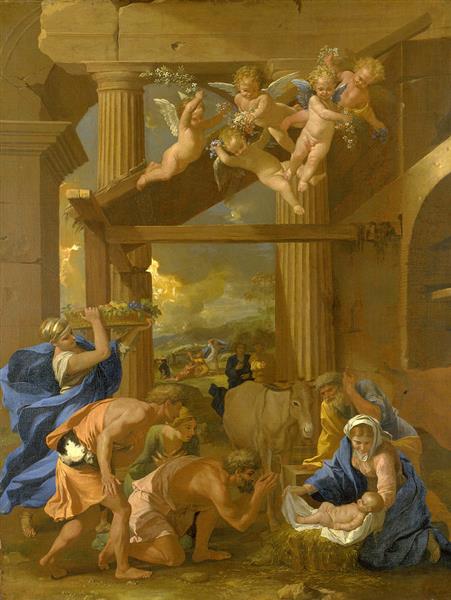 Adoration of the Shepherds

It belongs to a group of paintings with a predominately "coppery" colour scheme, from which its dating mainly derives. Classicising elements have been added to the usual figures.

The painting was evidently well-regarded, and 20 painted copies are recorded from approximately the next century, as well as seven print versions made between the 1660s and 1813. There are a number of drawings, some showing what appear to be early thoughts about the composition, though some may not be by Poussin or were created before the painting. As is often the case with Poussin, elements of the painting reflect the works of other artists, including Raphael.

To the usual cast of the Nativity of Jesus in art are added the earlier scene of the Annunciation to the Shepherds in the distance at the centre, five putti above, about to shower the scene with flowers, and a woman at left holding a large wicker tray with fruit. The scene takes place in a large but derelict classical building, to which a crude wooden lean-to stable has been added. The golden stone of the building is echoed by the tanned bodies of the shepherds, the cloudy sky, and other elements, giving an unusually unified "coppery" colour scheme to the painting, with the blue of the Virgin Mary's mantle and that of the woman carrying the fruit the other prominent colour. The ox, to the right of Joseph, almost disappears into the wall behind him.

Unlike those in the still central scene, the figures in the small background Annunciation to the Shepherds are highly agitated, with extreme and strenuous poses. The gesturing angel is loosely painted in white against the cloud, just above the foremost vine leaves in the basket. Like other figures by Poussin from this period, the foreground figures seem to have a frozen sculptural quality. The figure with a green dress is female. The foremost kneeling shepherd is close to, and perhaps derived from, a shepherd in a painting of the Nativity by Raphael (Vatican Loggie).

Other paintings by Poussin, generally dated to the years between 1633 and 1634, have similar colour schemes. The Adoration of the Magi in the Gemäldegalerie Alte Meister in Dresden (illustrated) is dated 1633; it has a very similar setting but a more varied colour scheme, so the London Adoration of the Shepherds is assumed to be later than that. The Saving of the Infant Pyrrhus in the Louvre, with a similar unified "coppery" scheme, has now been shown to have been finished by 1634 at the latest, so the London painting is now assigned to 1633–34 with reference to these, and also a drawing with a preparatory sketch on the verso, now in the Royal Collection. This was made for Marshall Charles III de Créquy when he was French ambassador to Rome, resident there between June 1633 and July 1634.