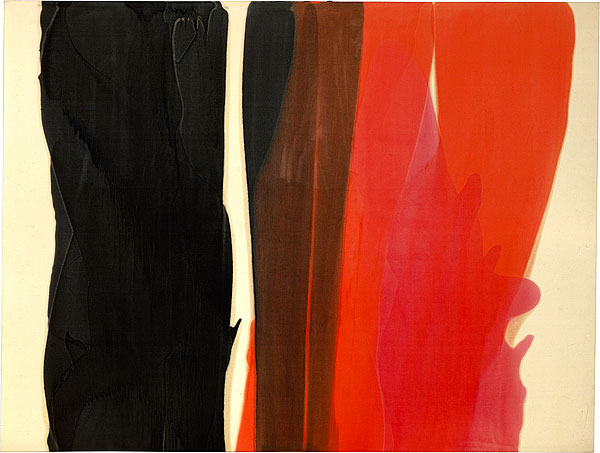 Dalet Zayin is one of a group of paintings known as 'Veils' which Louis began in 1954, when experimenting with the technique of staining unprimed canvas, and then continued between 1957 and 1960. The later 'Veils', of which there are approximately 130, were begun in the winter of 1957-58, soon after his exhibition at the Jackson Gallery in November 1957.* The series was effectively concluded after his show at French and Company, held in April 1959, but occasional 'Veil' paintings were still painted until the winter of 1959-60. The exact dating of Louis' 'Veil' paintings within this sequence is problematic as most were not dated by the artist and remained unstretched and unexhibited for some time after his death.

Louis expressed little interest in the titles of his works at least from 1954 onwards. The paintings were only given titles when it became necessary, for example when a work left the studio for an exhibition.** Most paintings were therefore named posthumously. After Louis' death it was decided to title the 'Veils' with transliterations of names of the letters of the Hebrew alphabet. The pictures were titled arbitrarily, in order of being stretched. The title Dalet Zayin combines the fourth and seventh letters of the Hebrew alphabet.

*Diane Upright Headley has dated the beginning of the second 'Veil' series at this date on the basis of a letter from Louis to Greenberg which mentions that a 'Veil' painting had been shown to a potential client in the spring of 1958. As this painting, Untitled 1958 (collection Mrs H. Gates Lloyd, Haverford, Pennsylvania), is a fully developed work it is likely that it was preceded by earlier trials (see Diana Upright Headley, 'In Addition to the Veils', Art in America, vol.66, no.1, January-February 1978, pp.84-94, cf. p.88)
**Even in the case of those works titled for exhibition, most of the titles it seems were suggested by the critic Clement Greenberg (see Diana Upright Headley, 'Morris Loius: The complete Paintings, New York: Harry N. Abrams, 1935, p.37) The generic title for Louis' series 'Veil', was coined by William Rubin (see William Rubin, letter to the editor, Artforum, vol. 9, no. 7, March 1971, p.78).