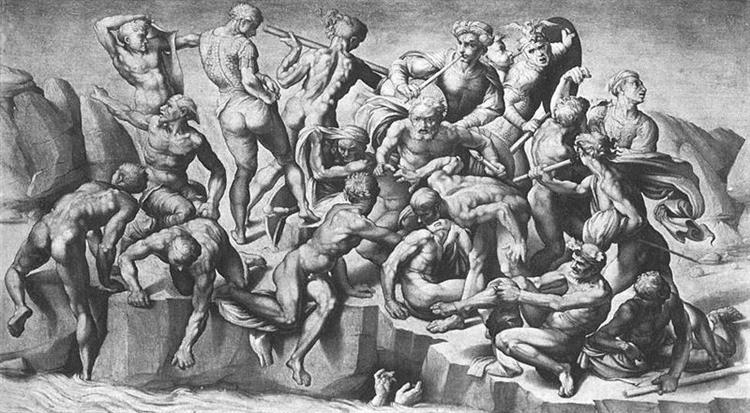 The Battle of Cascina is a never-completed artwork commissioned for creation by Michelangelo for the Palazzo Vecchio in Florence. He created only the preparatory drawing before being called to Rome by Pope Julius II, where he worked on the Pope's tomb; before completing this project, he returned to Florence for some months to complete the cartoon.


The work was commissioned from Michelangelo by Piero Soderini, statesman of the Democratic of Florence. It was intended for a wall of the Salone dei Cinquecento in the Palazzo Vecchio. The opposite wall was to be decorated by Leonardo da Vinci, who was commissioned to depict the Battle of Anghiari. The two battles were notable medieval Florentine victories. The Battle of Cascina was fought on 28 July 1364 between the troops of Florence and Pisa, resulting in victory of the former. A thousand Pisans were killed and two hundred more were captured.


Michelangelo never completed the painting, but did produce a complete cartoon of the composition. The cartoon was copied by several artists, the most notable extant copy being by Michelangelo's pupil Sangallo. Some of Michelangelo's preparatory drawings also survive, along with prints of part of the scene by Marcantonio Raimondi. According to Michelangelo's biographer Giorgio Vasari, the original cartoon was deliberately destroyed by Michelangelo's rival Bartolommeo Bandinelli because he was jealous of its fame; this occurred in 1512 upon the return of the Medici.


Michelangelo depicted a scene at the beginning of the battle, when the Florentine army was initially taken by surprise in the attack by the Pisans. He depicts Florentine soldiers bathing naked in the river Arno, responding to a trumpet warning of the Pisan attack. As the soldiers emerge from the river and buckle on their armour, they are threatened by shots from the Pisans. Several soldiers look or point toward the Pisan position to the left. One soldier has apparently been hit and fallen back into the river, while others leap energetically into action.


By choosing this episode, Michelangelo could depict his favoured topic: the nude male figure in various postures.