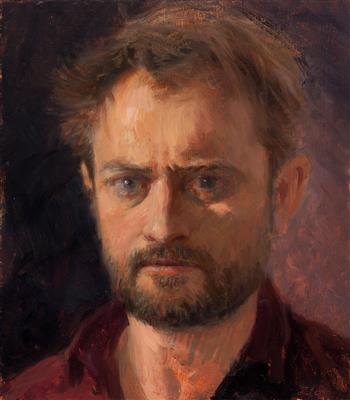 
Kristoffer Zetterstrand studied at Royal University College of Fine Arts in Stockholm and the Facultad de Bellas Artes in Madrid. Zetterstrand works in a classical painting tradition, but his works are often influenced by both art history and pixellated old-school computer graphics. His debut exhibition in 2002 consisted of paintings based on the online computer game Counter-Strike. Some of Zetterstrand's paintings can be found in Minecraft, an electronic game created by his former brother-in-law Markus Persson. His paintings are often based on virtual still lifes and scenography sculpted in 3D software, and he has broadened his sources of images to include old photographs.


Zetterstrand is represented by Stene Projects gallery in Stockholm.


In 2008 Zetterstrand received the IASPIS artist in residency grant. In 2012 he received the Marianne & Sigvard Bernadotte Art Award. In 2013 he was awarded the Stora Kakelpriset, an annual prize for the most innovative use of tiles or ceramics in construction in Sweden, for his mosaic Ager Medicinae (The Medical Landscape). The work is 340 square metres (3,700 sq ft) in size and was commissioned for the exterior of the parking garage at New Karolinska University Hospital in Solna. It depicts a rough timeline of the development of medicine in pixellated style.