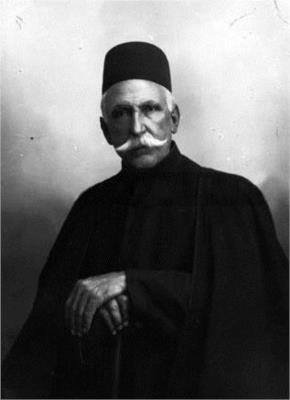 Kamal-ol-Molk received his education in Dar-ol-Fonoon. His love of painting helped him create some works during his school days. He also did some painting in the Shams-ol-Emareh edifice by thr order of Nasereddin Shah. During his stay in Europe he never spent an idle hour. In his visit to Iraq and during the years he taught in the art school he created numerous paintings. Unfortunately most of these paintings have either been destroyed or are in private collections and impossible to lay hands on. What will come here as his works include those kept in the former National Consultative Assembly, Golestan Palace, museums, and other centers.

Mohammad Ghaffari (Persian: محمد غفاری‎), better known as Kamal-ol-Molk (کمال‌المُلک), was an Iranian painter and part of the Ghaffari family in Kashan.

Mohammad Ghaffari, better known as Kamal-ol-Molk, born in Kashan in 1848, to a family with a strong artistic tradition, tracing their origins back to notable painters during the reign of Nader Shah. Kamal's uncle, Mirza Abolhassan Khan Ghaffari, known as Sanee-ol-Molk, a 19th-century celebrated painter, was highly notable for his watercolor portraiture. His father, Mirza Bozorg Ghaffari Kashani, was the founder of Iran's painting school and a famous artist as well. His brother, Abutorab Ghaffari, was also a distinguished painter of his time. Mohammad developed an interest in calligraphy and painting at a young age. In his childhood eagerness, he drew charcoal sketches on the walls of his room.

Upon completion of his primary education, Mohammad moved to Tehran. To further his studies, he registered in Dar-ul-Funun School, a modern institute of higher learning in Persia, where he studied painting with Mozayyen-od-Doleh, a well-known painter who had visited Europe and studied Western art. He studied there for a period of three years. In his school days, the young Ghaffari was given the name Mirza Mohammad Kashi. During his education he began to attract public attention as a talented artist.

In his visits to Dar-ul-Funun, Naser al-Din Shah Qajar came to know Mohammad Ghaffari and invited him to the court. Mohammad further improved his technique, and Nasereddin Shah gave him the title "Kamal-ol-Molk" (Perfection on Land).

During the years he stayed at Nasereddin Shah Qajar's court, Kamal-ol-Molk created some of his most significant works. The paintings he did in this period, which lasted up until the assassination of Nasereddin Shah, were portraits of important people, landscapes, paintings of royal camps and hunting grounds, and various parts of royal palaces.

In this busiest period of Kamal-ol-Molk's artistic life, he created over 170 paintings. However, most of these paintings have either been destroyed or taken abroad. The works he created in this period indicate his desire to develop his oil painting technique. He advanced so much that he even acquired laws of perspective by himself and applied them to his works. His mastery in the delicate use of a brush was as well as bright and lively colors distinguished him from his contemporaries.

Following Naser al-Din Shah Qajar's death, Kamal-ol-Molk found it impossible to work under his son, Mozaffar ad-Din Shah Qajar. Therefore, he set out for Europe in 1898, at the age of 47 to improve his art. Once there, he had discussions with distinguished European artists on style and technique, and copied some of Rembrandt's works, including "Self Portrait", "Jonah", and "Saint Matthew". Kamal-ol-Molk visited most of Europe's museums and closely studied the works of some well-known artists such as Raphael, Titian, and adapted and altered some of their works. He stayed in Europe for about four years. In 1902, he returned to Iran.

The increasing pressure on Kamal-ol-Molk, originating in Mozaffar ad-Din Shah Qajar's court, left him no option but to leave his country for Iraq, in spite of all the affection he felt for Iran. The visits he made to the holy cities in Iraq inspired his work at this time. "Karbala-ye-Moalla Square", and "Baghdad Jewish Fortune Tellers" are two of his most magnificent works of this period.