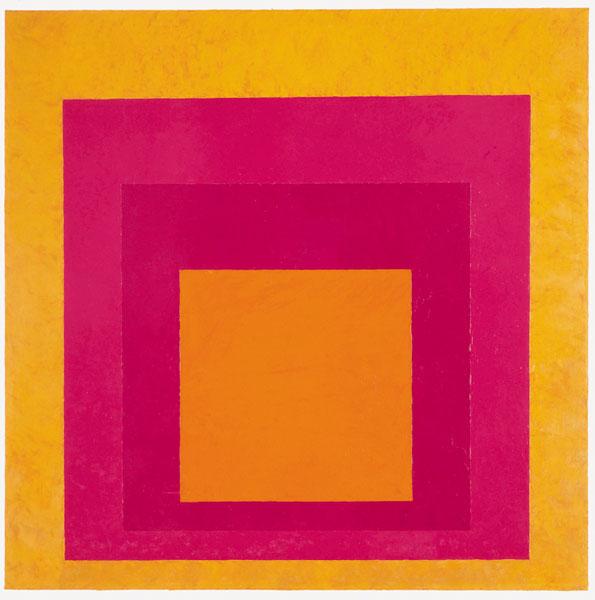 Homage to the Square (La Tehuana)

"One of the most immediately recognizable and influential series of paintings produced in the twentieth century is Josef Albers's Homage to the Square. Beginning the series in 1950, at age 62, Albers was to produce more than a thousand Homage paintings and prints, in four different formats. The works became widely known (one appeared on a 1980 United States postage stamp) and influenced two generations of hard edge and Minimalist art. The collection of the Modern Art Museum of Fort Worth includes three Homage to the Square paintings, from 1951, 1966, and 1967. All are the same size, and have the same format of four color squares, but each evokes different moods and visual effects through its colors.

Albers constructed his Homages by laying in paint as thinly as possible with a palette knife directly on a white ground. He likened his technique to intarsia and mosaic. Paint generally came straight from the tube, and edges of the squares were painted without masking tape. Reproductions of the paintings make them appear harder-edged than they actually are. Albers would begin a composition with the center square and work his way out, never painting one square on top of another. The artist set his masonite support flat on a table, not vertically on an easel, which reinforced his notion of the paintings as "platters to serve color."

Homage to the Square (La Tehuana) and the artist's other compositions in the series offer more than academic exercises in color manipulation, and differ in aim from the idealist and mystical geometric abstractions of Piet Mondrian and Kazimir Malevich. Through his concentrated exploration of, and insightful feeling for, color, Josef Albers produced compositions that evoke an extraordinary range of "character and feeling," while affirming and celebrating the directness and subtlety of vision." (Mark Thistlethwaite)