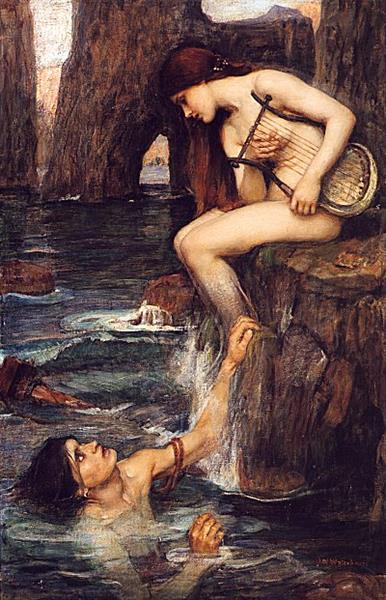 In The Siren (c.1900), John William Waterhouse depicts an exhausted shipwreck survivor clinging to a rock. He sees above him a beautiful young girl sitting on a rock playing harp. The female figure is the siren, a magical creature that inhabits the ocean and lures sailors to their doom with her beautiful song. In the painting, she holds an abalone shell harp and wears a pearl decoration in her hair. She is in the process of transforming into a mermaid, the lower parts of her legs are turning into fish scales and fins. Her auburn hair color is also significant, as it became an attribute of the femme fatale in the 19th century. The siren’s facial expression is passive and enigmatic, so it is unclear whether she intends to help or harm the sailor.

Waterhouse created a series of oil sketches and pencil drawings of sirens and mermaids. They were used for several paintings such as A Mermaid (1900), which was probably inspired by Alfred Tennyson’s poem The Mermaid (1830 ). In A Mermaid, the artist portrays a mermaid alone on a rocky beach: she is combing her long hair and singing the song of the sirens. The Siren was also inspired by the same series of sketches, and the initial idea for the composition came from Poetic Works of Percy Bysshe Shelley. However, unlike the painting, the sketch depicts a trio of mermaids. A possible inspiration for The Siren was The Depths of the Sea (1887) by Edward Burne-Jones that shows a mermaid dragging a sailor to the bottom of her watery grotto. In both paintings, the sirens seem like serene creatures that are unaware of the deadly effect of their song.

Waterhouse was attracted to the character of the siren for the same reason he was fond of subjects like Circe, Medea, and Lamia – all they are female characters whose beauty and power symbolize the dangers of femininity. In The Siren, Waterhouse focused on the intense encounter between the sailor and the siren without referencing a specific legend, myth, or literary narrative. This greatly differs from his earlier depiction of sirens in the painting Odysseus and the Sirens (1891), in which the sirens, half woman-half-bird launch a fierce attack on Odysseus’s ship. In Odysseus and the Sirens, the scene suggests a noisy and chaotic environment in which the sirens viciously attack the sailors. In contrast, The Siren captures an eerie, quiet atmosphere that emphasizes the tension between the seductress and the sailor, who is potentially her prey. The intimate connection between the siren and the sailor is similar to that between the male and female sitters in Waterhouse’s painting Nymphs Finding the Head of Orpheus (1900). In this instance, the young nymphs seemed hypnotized by the musician’s head floating in the water. Like The Siren, Nymphs Finding the Head of Orpheus was probably inspired by the same series of oil sketches and pencil drawings.

The Siren is a painting by John William Waterhouse. The painting depicts a siren sitting at the edge of a cliff, lyre in hand, staring down at a shipwrecked sailor floating in water, who in turn is staring up at her.

According to the William Waterhouse's website, this picture was painted in 1900 and is now part of a private collection. The estimated sales price for the painting in 2003 was one million pounds.

"The Siren He listened in thrall to the song of the siren, Her voice like a star as it flew through the air. He drowned in her eyes as she called him to follow, And likened the sun to the gold of her hair.

She swept up her arms and held him close to her, Her soft lips caressing the lines on his brow. He could not resist her, a magic had trapped him, And nothing could save him, for she had him now.

She pulled him down with her into the clear water, He gasped as death started the grip on his soul. His life ebbed away as she dragged him still further, And laughed when she saw she'd accomplished her goal." - Charlotte Lester.