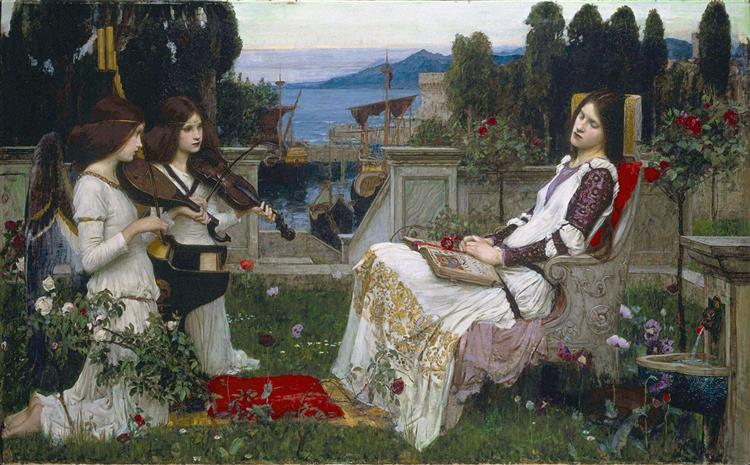 Saint Cecilia (1895) was painted at the height of Waterhouse’s career and was first exhibited in 1895 at the Royal Academy in London. It received great praise from critics, and later that year Waterhouse got the full membership of the Royal Academy. The painting depicts Saint Cecilia, a Roman virgin martyr who lived in the 2nd or 3rd century AD. Cecilia was raised as a Christian and took a vow of chastity. She married a Roman nobleman named Valerius, who she persuaded to accept sexual abstinence by allowing him to see her guardian angel. The angel descended from the heavens and placed garlands of lilies and roses on their heads. After the revelation, Valerius and his brother were baptized. All three of them died as martyrs.

In Christian iconography, Cecilia is the patron saint of music. The connection to music relates to the early accounts of Cecilia’s life. According to these, Cecilia did not want to hear musical instruments because she wanted to remain pure to be able to hear heavenly music. Saint Cecilia is based on a verse from Alfred Tennyson’s poem: 'In a clear walled city on the sea, Near gilded organ pipes... ...slept St Cecily’. Tennyson’s poems often served as an inspiration to Waterhouse. The best-known examples are Waterhouse’s three paintings of the legend of Lady of Shalott that were inspired by different verses from Tennyson’s 1832 poem The Lady Shalott.

Waterhouse depicts Saint Cecilia sitting in a garden overlooking the sea. She has fallen asleep and two youthful angels serenade her with a violin and a rebec. Waterhouse weaves different symbols into the composition. For example, the roses in the walled garden refer to the rose garland that the angels placed on Cecilia’s head. The other flower in the garden is the poppy – a well-known symbol of sleep and serenity. Waterhouse tried to emulate the historic setting of Saint Cecilia’s life, likely by using images of Roman antiquity available in books and museums. At the same time, the setting is also reminiscent of the Florentine landscape depicted in Renaissance paintings like Leonardo Da Vinci’s Annunciation (c. 1472). The focal point of the painting is Saint Cecilia. Like many Victorian artists, Waterhouse adopted the pose of the reclining female figure, which also expressed the continuing interest in classical sculpture and antiquity. The reclining pose was used by Waterhouse’s in different paintings such as Ophelia (1889) and Ariadne (1898). Some have suggested that the choice of pose was also influenced by Edward Burne-Jones’s The Legend of Briar Rose (1885-1890) – a series of paintings that portray the story of Sleeping Beauty.

Throughout his career, Waterhouse had a habit of often using the same models, and the models in Saint Cecilia appear in other works by the artist. In recent research, one of his favorite sitters Muriel Foster was identified as the model for two angels in Saint Cecilia. Foster began modeling for Waterhouse at the age of fifteen in 1893 and was featured in paintings such as A Mermaid (1900) and Lamia and the Soldier (1905).