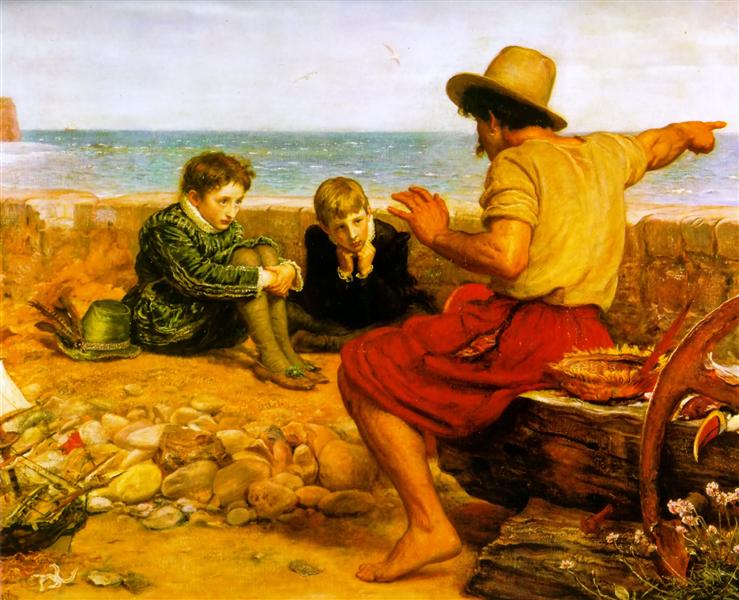 The Boyhood of Raleigh

The Boyhood of Raleigh is a painting by John Everett Millais, which was exhibited at the Royal Academy in 1871. It came to epitomise the culture of heroic imperialism in late Victorian Britain and in British popular culture up to the mid-twentieth century.

The painting depicts the young, wide-eyed Sir Walter Raleigh and his brother sitting on the beach by the Devonshire coast. He is listening to a story of life on the seas, told by an experienced sailor who points out to the sea.

The painting was influenced by an essay written by James Anthony Froude on England's Forgotten Worthies, which described the lives of Elizabethan seafarers. It was also probably influenced by a contemporaneous biography of Raleigh, which imagined his experiences listening to old sailors as a boy. Millais travelled to Budleigh Salterton to paint the location.

Millais's sons Everett and George modelled for the boys. The sailor was a professional model. Millais' friend and biographer, the critic Marion Spielmann, stated that he was intended to be Genoese. He also argues that the sailor is pointing south towards the "Spanish main".

The painting has been parodied many times in political cartoons.

In 1870 David Low published a cartoon showing the Earl of Birkenhead (Secretary of State for India), Stanley Baldwin (Prime Minister) and Winston Churchill (Chancellor of the Exchequer) listening to "Tales of the Dominions" from a diminutive sailor (Leo Amery, Colonial Secretary - who was a very short man).

In 1993 the Sunday Telegraph ran "The Boyhood of Hurd and Major". The then Prime Minister John Major and Foreign Secretary Douglas Hurd, who had recently pushed the Maastricht Treaty through Parliament against the wishes of many Conservatives, were shown as small boys in Elizabethan costume, listening as an old sailor (Sir Edward Heath) gestured towards the coast labelled "Europe" visible on the other side of the water. Former Prime Minister Heath - whose hobby had been yachting - had taken Britain into the EEC (as it was then called) during his premiership, and had grown up in Kent where the coast of France is visible on a clear day. At the time Heath was Father of the House of Commons and enjoying something of an Indian Summer after the ousting of his political nemesis, the eurosceptic Margaret Thatcher, as Prime Minister in 1990.

In 1999 the Daily Telegraph published a Garland cartoon, showing the then Conservative leader William Hague as a small boy (this was common in satire at the time, as Hague had first attained national fame as a teenager in the 1970s), while two old sailors - former Foreign Secretary David Owen and former Chancellor of the Exchequer Denis Healey - gestured inland and away from a ship labelled "Euro". The two elder statesmen described themselves as pro-European but opposed to British membership of the Single Currency.

The picture has also appeared in recent explorations of postcolonialism, most notably Salman Rushdie's novel Midnight's Children, in which the narrator Saleem Sinai partly misremembers and transforms the meaning of the painting, a copy of which hung on his bedroom wall when he was a child.