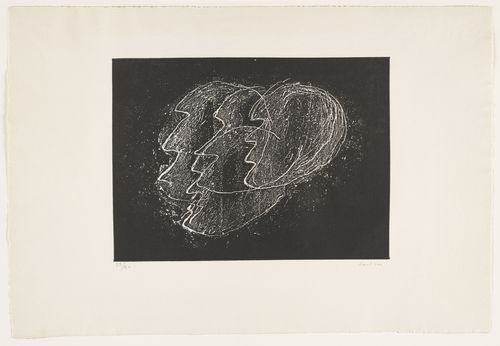 Although he started his career in the 1920s by working in a relatively traditional, representational mode, Jean Fautrier did not reach artistic maturity until the mid-1940s, when he created his seminal Hostage paintings. These works—begun in 1943 when his studio was near a Nazi prison camp outside of Paris and he reputedly heard the cries of its victims—depict anonymous, abstracted heads, limbless torsos, and disembodied hands. With their crude, encrusted surfaces, built up through the use of a plasterlike paper pulp, the paintings were interpreted as emblems of the violence and decay of the Holocaust and also as a call to moral action in resistance. Their quasi-abstract, gestural nature also helped usher in a new movement known as Art informel (formless art), a European counterpart to Abstract Expressionism in the late 1940s and 1950s.
Fautrier valued the democratic potential of printmaking and created nearly three hundred prints during his lifetime—roughly half lithographs and half intaglio prints, as well as a handful of woodcuts. Many were produced for illustrated book projects in collaboration with leading French writers who championed his work. His subjects included hostage imagery, erotic nudes, and abstracted plant forms. In the etching shown here he approximated the rough, textured surfaces of his Hostage paintings by using the etching needle to scar and pit his plate.
Although most of Fautrier's prints were executed during the 1940s, they were often not editioned until after 1958, when he entered into a contract with publisher Michel Couturier to make new impressions of old plates. Prior to authorizing these comparatively traditional editions, Fautrier devoted much of the decade from 1946 to 1956 to an experimental series of "multiple originals," in which prints on paper were overworked with gouache, pastel, and paper pulp and mounted on canvas. Although intended to make his art more widely available, the project was not a commercial success.