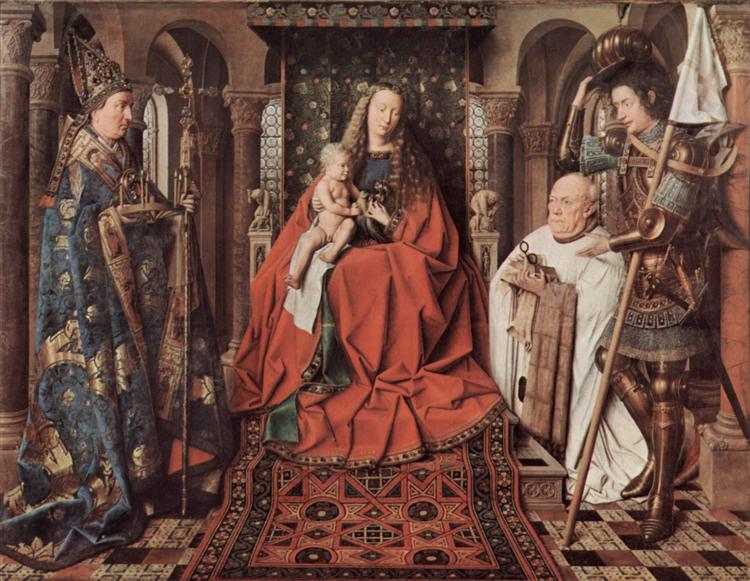 The Virgin and Child with Canon van der Paele is a large oil-on-oak panel painting completed around 1434–36 by the Early Netherlandish painter Jan van Eyck. It shows the painting's donor, Joris van der Paele, within an apparition of saints. The Virgin Mary is enthroned at the centre of the semicircular space, which most likely represents a church interior, with the Christ Child on her lap. St. Donatian stands to her right, Saint George — the donor's name saint — to her left. The panel was commissioned by van der Paele as an altarpiece. He was then a wealthy clergyman from Bruges, but elderly and gravely ill, and intended the work as his memorial.

The saints are identifiable from Latin inscriptions lining the borders of the imitation bronze frame, which is original. Van der Paele is identifiable from historical records. He is dressed in the finery of a medieval canon, including white surplice, as he piously reads from a book of hours. He is presented to Mary by Saint George, his name saint, who holds aloft his metal helmet in respect. Saint Donatian, dressed in brightly coloured vestments, stands to the left. The panel is noted for the finery of clothing, including exquisite representations of furs, silks and brocades, and the elaborate and detailed religious iconography. The Virgin's throne is decorated with carved representations of Adam and Eve, prefigurations of the Crucifixion and Resurrection of Jesus, and scenes from the Old Testament. The painting is lined with a series of inscriptions which comment on the saints, and include van Eyck's signature.

The van der Paele panel is widely considered one of van Eyck's most fully realised and ambitious works, and has been described as a "masterpiece of masterpieces".

Joris van der Paele is identifiable both from his resemblance and by the paternal and maternal (the Carlans') coat of arms at the corners of each frame. He was born in Bruges around 1370, and spent his early career as a papal scribe in Rome before returning to his native city in 1425 as a wealthy man. He was appointed to a canonry of St. Donatian's collegiate church, a position which gave him income from the various parishes under his remit.

An illness around 1431 left van der Paele unable to fulfil the functions of his office, and led him to reflect upon his position as canon and on his mortality. In response he endowed a chaplaincy to the church and commissioned this work from van Eyck. The artist was at the height of his fame and in high demand, and this, along with the large size of the panel, meant that the commission took a lot longer to complete than was initially envisioned; two completion dates can be found on the frame, implying that the earlier date was aspirational and missed.

In return for the bequest, the church granted the canon a requiem mass, a daily mass and three votive masses a week, meant to intercede with the divine on his behalf. A second chaplaincy in 1443 centred on prayers for his family, and guaranteed that after his death, the requiem mass would end with readings of the Miserere mei and De profundis.