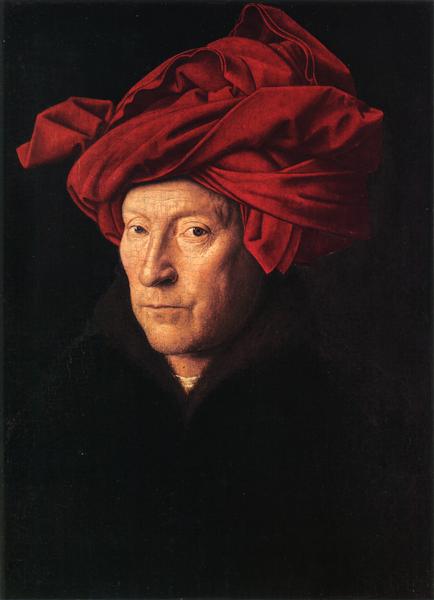 Portrait of a Man (Man in a Turban)


Probably his Portrait of Margaret van Eyck was a pendant, although her only known portrait is both dated 1439 and larger. It has been proposed that van Eyck created the portrait to store in his workshop so that he could use it display his abilities (and social status, given the fine clothes evident in the portrait) to potential clients. However, his reputation was such in 1433 that he was already highly sought after for commissioned work.


The panel has been in the National Gallery, London, since 1851, having been in England since Thomas Howard, 21st Earl of Arundel acquired it, probably during his exile in Antwerp from 1642–44.


The original frame survives (the vertical sides are in fact a single piece of wood with the central panel), and has the painted inscription "JOHES DE EYCK ME FECIT ANO MCCCC.33. 21. OCTOBRIS" ("Jan van Eyck Made Me on October 21, 1433") at the bottom, and at the top, the motto "AlC IXH XAN" ("As Well As I Can"), which appears on other van Eyck paintings, always written in Greek letters, and includes a pun on his name. As on other van Eyck frames, the letters are painted to appear carved.


Autographing and dating panel paintings in the early 15th century was unusual. Even when dates were added they tended to be for the year only, whereas here van Eyck spells out the specific date, October 21st. As too few of his paintings survive (the extant works number somewhere in the low 20s) to judge his prolificacy, the degree of detail and skill indicates that they took months rather than days to complete. Thus the date may have served as a boast to potential commissioners rather than as a matter of fact.


Since the motto Als Ich Can appears in many of van Eyck's other works, it is believed that he is challenging other artists to do better than him. Although written in Greek letters, the phrase is originally Flemish. Having a Flemish phrase in Greek writing implies van Eyck saw himself in "competition with the ancients as well as with his contemporaries". Regardless of his reasoning behind including the motto in many of his works, it can be implied the phrase is a sign of van Eyck's self-consciousness about his work as a painter.


Like all van Eyck's portraits, it shows a sharp and detailed analysis of the subject. The painting is a third life-size with the sitter sitting in three-quarters profile. His stubbled face is heavily lined with the onset of middle age, and his eyes are semi-bloodshot. He look outwards with a piercing gaze, looking directly at the viewer—possibly being the first portrait in a millennium to do so. His weary facial expression is achieved through a combination of his strong nose, tightly pursed by wide mouth and the framing of his face by the headdress. The overall expression is of a man, whom one scholar says "see things – himself included – in close-up, but without losing track of the bigger picture."