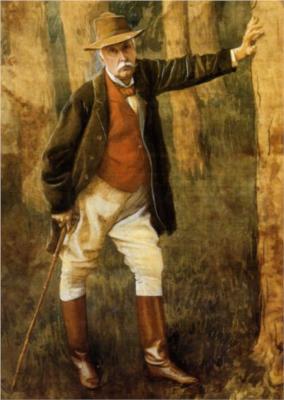 Jacques Joseph Tissot (French: [tiso]; 15 October 1836 – 8 August 1902), Anglicized as James Tissot (/ˈtɪsoʊ/), was a French painter and illustrator. He was a successful painter of Paris society before moving to London in 1871. He became famous as a genre painter of fashionably dressed women shown in various scenes of everyday life. He also painted scenes and characters from the Bible.

Jacques Tissot was born in the port town of Nantes, France and spent his early childhood there. His father, Marcel Théodore Tissot, was a successful drapery merchant. His mother, Marie Durand, assisted her husband in the family business and designed hats. A devout Catholic, Tissot's mother instilled pious devotion in the future artist from a very young age. Tissot's youth spent in Nantes likely contributed to his frequent depiction of shipping vessels and boats in his later works. The involvement of his parents in the fashion industry is believed to have been an influence on his painting style, as he depicted women's clothing in fine detail. By the time Tissot was 17, he knew he wanted to pursue painting as a career. His father opposed this, preferring his son to follow a business profession, but the young Tissot gained his mother's support for his chosen vocation. Around this time, he began using the given name of James. By 1854 he was commonly known as James Tissot; he may have adopted it because of his increasing interest in everything English.

In 1856 or 1857, Tissot travelled to Paris to pursue an education in art. While staying with a friend of his mother, painter Elie Delaunay, Tissot enrolled at the Ecole des Beaux-Arts to study in the studios of Hippolyte Flandrin and Louis Lamothe. Both were successful Lyonnaise painters who moved to Paris to study under Jean-Auguste-Dominique Ingres. Lamothe provided the majority of Tissot's studio education, and the young artist studied on his own by copying works at the Louvre, as did most other artists of the time in their early years. Around this time, Tissot also made the acquaintance of the American James McNeill Whistler, and French painters Edgar Degas (who had also been a student of Lamothe and a friend of Delaunay), and Édouard Manet.

In 1859, Tissot exhibited in the Paris Salon for the first time. He showed five paintings of scenes from the Middle Ages, many depicting scenes from Goethe's Faust. These works show the influence in his work of the Belgian painter Henri Leys (Jan August Hendrik Leys), whom Tissot had met in Antwerp earlier that same year. Other influences include the works of the German painters Peter von Cornelius and Moritz Retzsch. After Tissot had first exhibited at the Salon and before he had been awarded a medal, the French government paid 5,000 francs for his depiction of The Meeting of Faust and Marguerite in 1860, with the painting being exhibited at the Salon the following year, together with a portrait and other paintings.

Émile Péreire supplied Tissot's painting Walk in the Snow for the 1862 international exhibition in London; the next year three paintings by Tissot were displayed at the London gallery of Ernest Gambart. In about 1863, Tissot suddenly shifted his focus from the medieval style to the depiction of modern life through portraits. During this period, Tissot gained high critical acclaim, and quickly became a success as an artist. Like contemporaries such as Alfred Stevens and Claude Monet, Tissot also explored japonisme, including Japanese objects and costumes in his pictures and expressing style influence. Degas painted a portrait of Tissot from these years (Metropolitan Museum of Art, New York), in which he is sitting below a Japanese screen hanging on the wall.