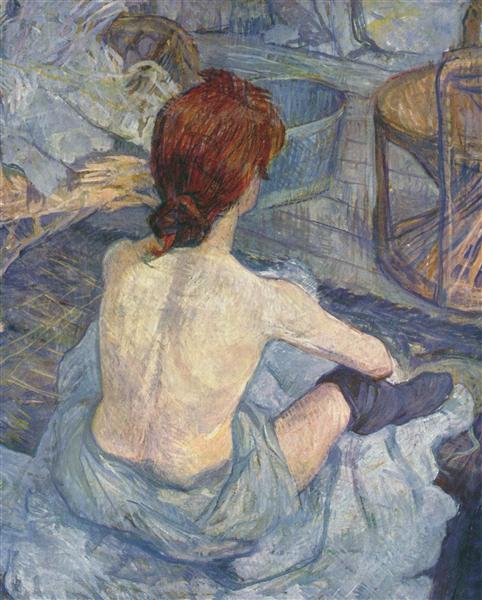 Toulouse-Lautrec has left countless pictures of women in private moments, often at their toilet. Here the woman fills the centre of the composition and is shown close up, offering the spectator a view of a sculptural back. The wicker chairs around her suggest that the scene took place in the artist's studio, rue Caulaincourt.

Although at the time the theme of a woman at her toilet was often treated, especially by Mary Cassatt and Bonnard, it was above all the naturalist influence of Degas which dominates in this painting by Lautrec. The neglect of the academic pose and the accelerated perspective rather unusual in Lautrec's work sound like an echo to the series of women at their toilet that Degas presented at the eighth and last Impressionist exhibition in 1886. The framing of the scene and the high viewpoint bring to mind the masterly pastels by Degas whom Lautrec deeply admired. Like his elder, Lautrec showed women "without their frills" as if he were "peeping through the keyhole". However, he differs from Degas in the humanity with which he observed and painted them.

This painting has led to a number of misunderstandings. Indeed, it has had several titles and its date has been changed. It has now been established that it was painted in 1889 and not in 1896 as is stated in the old catalogues. It is certainly this work which Lautrec exhibited under the name of "Rousse" in the Exhibition of the XX in Brussels in 1890. This title, chosen by the artist himself, recalls his preference for the red-haired models he painted all his life.