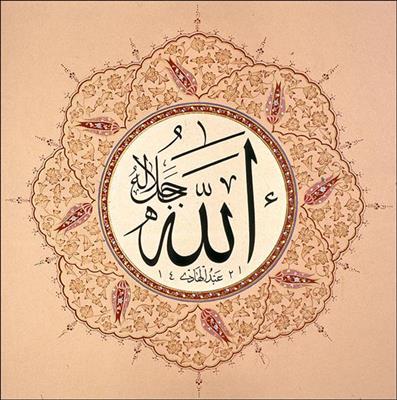 Hâfiz Osman was a Dervish and Islamic calligrapher, born in Istanbul. He was tutor to the sultans Ahmed II, Mustafa II and Ahmed III, and was esteemed by the sultan Mustafa II, who held his inkwell as he wrote.

Hâfiz Osman is credited with establishing the hilye. A hilye is a calligraphic panel containing a hadith-based text describing the Prophet's physical appearance and attributes. Hâfiz Osman incorporated such texts, which had been popular for some time, in a formal design that soon became standard for this art form. Hilyeler came to be used as wall decorations or surface adornments, fulfilling much the same function as figurative paintings in other religious traditions. While containing a concrete and artistically appealing description of Prophet's appearance, they complied with the strictures against figurative depictions of the Prophet, leaving his appearance to the viewer's imagination.

Hâfiz Osman is also credited with reinvigorating the tradition of Seyh Hamdullah, in particular with re-introducing a number of scripts that had fallen into disuse. Among his surviving works are copies of the Koran held at the Topkapi Palace Museum Library in Istanbul and the Nasser D. Khalili Collection. The volumes of the Koran produced by Osman were among the most highly sought-after in his time.